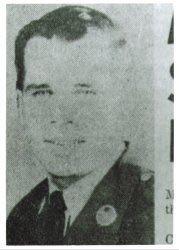 Albert Christy was part of a unique military family. His father, Ambrose Christy, served the U.S. Army in World War I in France, where he was a victim of a mustard gas attack. His four brothers all served in the military, too.

What makes the family unique, however, is that each of them served in a different branch: Freddy in the Navy, Paul in the Coast Guard, Donald in the Army Air Force, Charlie in the Marine Corps, and Albert in the Army.

Perhaps the strength and determination of all of them came from a very hard childhood. Their mother died in childbirth in 1940, leaving Ambrose with eight children. Two of them, Albert and Paul, lived for a couple of years in St. Joseph’s Orphanage in Erie before they started school.

Albert dropped out of Mercer High School in his Junior year and joined the Army in 1955. After serving in Korea, he was assigned to Germany from March 1962 to April 1965. In September, 1964, he married Inge Gerlach. Through the Army education program, he achieved his high school diploma.

Upon leaving Germany, he was stationed at Fort Ord, California. From there, in spite of his family’s pleas, he volunteered for Vietnam. On February 6, 1966, he was assigned to the 25th Infantry Division in Darloc Province. A little more than a month later, while on a combat mission, Sgt. Albert Christy was killed by a sniper.

He left behind his wife, Inge, and their daughter, Diana, and two step-sons from Inge’s previous marriage. He is buried in San Francisco’s Golden Gate National Cemetery. His family was living in Seaside, California, while he was in Vietnam.