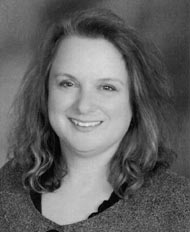 In providing for its own needs, the United States military services play vital roles in fulfilling the needs of society at large. The Shenango Valley has a family practitioner because the United States Air Force enabled Dr. Allison Angott to get her medical degree.

“Without the Air Force,” she said, “I would have had to be a specialist to pay off the debts of medical school. I say to my patients I’m your tax dollars at work. I’m here as a physician because you helped me go to medical school. And I appreciate that.”

When she needed financial aid to attend medical school, she discovered the Air Force’s medical training program. Through it, she was able to earn her degree at the University of Pittsburgh, and complete her residency in Erie.

She got her introduction to military life during month-long tours of duty each summer.

“We were sworn in as officers, wore a uniform, went to officers training and learned how to march, salute, and so forth. Each year I was at a different military hospital. I did a rotation in cardiology in Dayton, in pediatrics in San Francisco, survival training in Texas.”

When she went on active duty, she was assigned to Maxwell Air Force Base in Montgomery, Alabama.

“A week or two after I came on duty, Kuwait was invaded. I went on standby to be deployed as an orthopedic surgeon. That’s the only thing that made me uncomfortable during my tour. The Air Force uses their family doctors to fill in specialist slots because we have a broad range of training.”

Dr. Angott was never deployed, but her base in Montgomery expanded to receive casualties. The doctors and staff there were also trained in disaster/mass casualty exercises.

Part of Dr. Angott’s patients came from Montgomery’s large retired military population, which provided her with experience in all aspects of family practice.

Her four years of active duty provided her with more than a degree and medical experience.

“I am more appreciative of those who have gone before me and those who have given their lives for our country. I thank every serviceman I meet, and I honor the flag. I know the Constitution and a little bit more about what it means to be a citizen. I certainly didn’t pay enough attention when I took those classes in high school.”

Dr. Angott and her husband Richard have three daughters – Bethany, Leah, and Moriah.