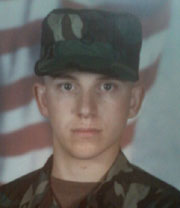 Many military police security units do their best to keep people out of military installations and operational areas. Andy Hamilton’s 307th Military Police Company did that for a while on a humanitarian in El Salvador.

“We guarded engineers while they built hospitals and schools throughout the country,” he said.

But in Iraq, at Camp Bucca, he spent his time hardening the prison to make it less escapable.

Originally from a place near Barkeyville, PA, Andy joined the army in 2005 at age 18, fresh out of Franklin Area High School.

“I felt like I wanted to serve my country,” he said. “All my life I did heavy equipment operating, construction work, and farming. I decided I wanted a break from the monotony, so I joined the Military Police. And I thought it might set me up for a good career after I got out.”

“We spent a lot of time doing desert training in Fort Irwin, California,” he said. “It was actually a lot of fun.”

Of course, the fun had a purpose, which was to prepare the company for deployment in Iraq. That happened in 2008, right after Andy got married.

Camp Bucca was named after Ronald Bucca, who had been an MP with the 800th Military Police Brigade, and was the New York City fire marshall who died in the 9-11 attack on the World Trade Center. Camp Bucca was developed into a model detention facility, with prisoners housed in cinder block buildings rather than tents. It even had a U.S. Army hospital to care for the detainees.

The work may have been hard, under the constant awareness that the enemy might fire a rocket into the compound at any time. But Andy’s tour in Iraq wasn’t all bad. His best memories are of the companionship among the American soldiers there.

“All of us there had a strong bond,” Andy said. “We were as close as family.

And, of course, there were the leisure time activities, such as volleyball and bocce.

“All that desert made a good volleyball court,” Andy said.