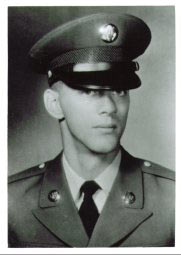 The Tet offensive launched by the North Vietnamese army and the Viet Cong late in January, 1968, cost the United States military more casualties than any comparable in the Vietnam war. One of those was PFC Anthony DeGerolamo from Wheatland, PA.

PFC DeGerolamo was assigned to Headquarters Company, 5th Battalion, 60th Infantry, 9th Infantry Division. As a medic, he would have been attached to the battalion’s line companies during combat operations. They were indeed outstanding fighting units. On February 1st, 1968, Companies B and C charged from their Mekong Delta base in armored personnel carriers to counterattack the enemy forces who had seized parts of Saigon. According to the Presidential Unit Citation awarded them, “With complete disregard for their personal welfare, the men of Company B and C began a vicious assault against the enemy stronghold. Demonstrating indomitable courage and superior firepower, they crushed the determined foe.”

The son of Mr. and Mrs. Anthony DeGerolamo, Anthony had been an outstanding football player and an honor student in Farrell High School. His football coach, William Gargano, described him for the Sharon Herald as “a quiet boy you didn’t know was around unless he hit you on the football field.”

Gargano said DeGerolamo was one of the better linebackers ever to play for Farrell. “He wasn’t a big boy, but he was very quick and agile. He was a very fine football player and a real gentleman.”

He was drafted while he was near completion of his courses in pre-med at Youngstown State University. He arrived in Vietnam on January 5, 1968, exactly a month before he was killed.