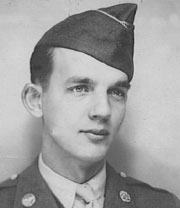 On April 8, 1945, Bill Roscoe found himself in the kind of situation where people tend to bargain with God. Like, “Lord, get me out of this and I promise to serve you the rest of my life.”

Bill had already made that commitment when he was much younger, so he made a another one: “Get me out of this and I promise you I will never worry again.”

He was radio operator on a B-17 Flying Fortress when his plane was crippled by anti-aircraft. Instead of bailing out, Bill stayed to help his friend get out of the ball turret gunner’s pod.

The inexperienced crew members were bewildered, afraid to jump. So Bill pushed them out. Failing to count to ten before opening their chutes, they were too close to the plane when a burning wing broke off and threatened to take them all out. The last one to jump, Bill managed the nudge the wing enough for the wind to take it away from the others.

With his chute full of holes, he hit the ground hard, injuring his feet. He was captured by the Gestapo, who marched the prisoners hundreds of miles. They had nothing to eat but bread made from sawdust and potatoes. Prisoners and guards suffered together.

They ended up in Stalag Luft 7A, a prisoner of war camp for airmen. Starvation and severe treatment caused Bill’s weight to drop from 185 to 85 before General Patton’s forces liberated them.

“For ten years after he got out of the service,” said his wife Dee, “Bill was very sick. He was yellow from toxic poisoning. The only thing that pulled him through was Dr. K. W. Bertram, and the Lord.”

At his 90th birthday party in 2005, Bill said that he and Dee had never had an argument. Faithful to the second promise he made to the Lord, he said he lived a no-stress life with a no-stress wife.

He and Dee were also faithful to his promise to serve the Lord. They served as Eucharistic ministers for 20 years, and taught religion for more than twice that long.

Fifty years after the end of the war, Bill was awarded the Distinguished Flying Cross for that incident that lasted a few minutes in 1945. But he and Dee valued far more the satisfaction they earned through a lifetime of worry-free service to the Lord, to each other, to their family, and to their community.