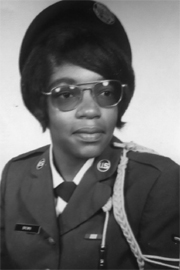 Cynthia Brown joined the Air Force for a combination of reasons. She wanted to find out who she was − she had some identity issues and thought the military might help find her out the answers.

In high school, one hears rumors about women in the military and that peaked her interest. Her choice for the military was between the Navy and the Air Force. The Army was out of the question, because according to her the Army did not treat women well. After careful consideration Cynthia went in the Air Force.

“My poor mother didn’t even know until I graduated from high school that I had been accepted into the service,” she said.

Her mother found out when the recruiter showed up at Cynthia’s graduation. Her mother’s response was shock. She had wanted Cynthia to go to college, but she really didn’t fight it too much. Both Cynthia’s father and her mother’s current husband had been in the military. Her mom knew there was a sense of security. However, she did cry for the first two years Cynthia was gone.

Since Cynthia was nine she had been travelling on her own, first on a Greyhound bus, and then on an airplane to go visit her grandmother. She was looking forward to being on her own.

She was determined to succeed. It was nerve wracking, but overall, a good experience. Cynthia and her friend had enlisted together and were supposed to be on the buddy system; however, this did not transpire. They would see each other as the squadrons would pass each other.

In boot camp she witnessed a lot of crying. Some girls had never been away from home and wanted out, but Cynthia said she never wanted out. In fact, she recalls some interesting times when she and her roommate would get in trouble for stashing extra stuff in the “snake pit” or for sleeping on top of their covers. Every morning when you got, you had to have your room as well as yourself in inspection order in half an hour.

“You would learn how to cheat a little bit and just hope you didn’t get caught,” she said.

Someone was always on duty throughout the night to watch the barracks and make sure everyone was sleeping. Cynthia looks back on her escapades as “just the fun trouble.”

After boot camp, Cynthia was one of only five women out of 100 to go to Air Traffic Controller Training at Keesler Air Force Base in Biloxi, Mississippi. She had not requested Air Traffic Controller Training and asked how she ended up in it. They told her she was highly qualified due to her test scores during basic training. She really did not want to do this, so she chose to phase out on purpose.

“Good Lord, I can’t believe I am saying this,” she says today, “but I was only eighteen. That was years ago.”

During this time she was a leader, marching the troops to class each day. The Air Force called it “Ropes” because of the green, yellow, or red cords they wore on their shoulders. She never made it to the red rope, which was the highest. She went through three blocks of training before they let her transfer.

She chose to go into Administration and was transferred to Maxwell Air Force Base in Montgomery, Alabama. According to Cynthia, this is where she really began to suffer. She hated every waking moment of it.

“Alabama and being black, can you figure out the rest?” she asked.

She found herself stationed in a city where the ink was barely dry on Civil Rights legislation. Prejudice was rampant. Everyone she hung out with at the time was Caucasian, and she feels it was the only reason she was ever served at restaurants, regardless of the Civil Rights Law having been past. To experience the hate and racism continuously was very stressful.

Cynthia equates her experience during this time as torture. She truly began hating her place in life and questioning her identity.

During this time she began questioning her sexual identity. She started to realize that she was not a straight woman, but still continued to hide this part of herself from people. Her focus on something other than being in such a hateful place as Alabama was her key to survival.

Cynthia began to realize how serious her sexual orientation issues were.

“If you can understand how you are hiding something and you want it to come out,” she said, “but only to the right people − and I didn’t know who the right people were. I just had to live on what I heard around.”

She remembers walking with a group of people and having them point out a barracks that was “full of nothing but those lesbians.” She was very thankful she didn’t live in that barracks, because she did not want to be associated with being a lesbian. She hid this part of her life for many years. She guessed that she wasn’t ready to come out. She started to cope with her fear of being in Alabama where George Wallace preached segregation now, segregation forever, by focusing on her personal life.

Cynthia dated a gentleman who she said had connections. Cynthia was very confused at the time. She had her military identity where she had to be tiptop and spit shined and polished up all the time. She had one identity where she wanted to be with women and then her other identity where she had to be pretend to be straight. This was the beginning of her crazy life in the military because she felt that she had to be three or four people just to get through the day. She worked in the ROTC Headquarters while at Maxwell Air Force Base and truly enjoyed working with the high schools in the area. Her 15 months in Alabama was a very trying time for her, overall.

Cynthia put in for an overseas tour, hoping to escape and get out of the country. She felt that she had to leave in order to find out who she truly was. She put in for various overseas bases, hoping to get sent to the Philippines. Unfortunately, her orders were red-lined.

In 1973, she was transferred to Elmendorf Air Force Base in Alaska. There she really discovered who she was as a person. This, however, was a scary time in the military. She did not want to be kicked out of the service; she wanted to be a topnotch Airman, but she also wanted to be true to herself. She worried how her family would feel if she was discharged because she was gay. This was an era where people were being sent to shrinks and being disowned, kicked out their homes, and she just didn’t want to be like that. She just wanted to stay in the closet.

It was not uncommon for “Witch hunts” during this time. If you were suspected of being gay, then you and those you hung around with were under close scrutiny. It was an unjust time of persecution for all people accused. Cynthia, like so many other gay military people, chose to protect her career and keep the pressure and suspicion off by marrying Sam, a gay man, in the military. Their agreement was to stay married as long as they were in the military. They still went to their jobs on base and lived off base, which allowed for some freedom. They would hold true to their agreement and dissolved the marriage after Sam’s enlistment was over. 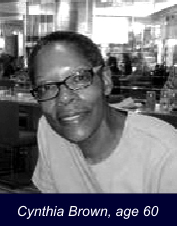 In 1977, Cynthia got out of the Air Force and joined the Air National Guard in Alaska. She thought she could handle one weekend a month and one week a year in the Guard. She would be deployed to Japan and California. Unfortunately, the pressure to hide who she was started all over again during her four years in the Air National Guard.

Cynthia loved the Air Force and Air National Guard, but hated the fact that she had to hide who she was the entire time she was in the service. She gives admiration and credit to the people she knows who went their whole military career hiding the fact they were gay.

Cynthia summed up her experience in her own eloquent way. “The military did not love me the way I loved the military, so I had to let it go.”