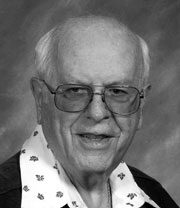 In 1942, a project called the Army Specialized Training Program (ASTP) sent recruits to colleges and universities across the United States. The intent was to create a specialized corps of Army officers to enhance the conduct of the war and the restoration of civilian governments in Europe after the war. Tom Fiedler passed a series of tests to qualify for the program. He completed infantry basic training at Fort Benning, Georgia before being sent to Westminster College.

After just one semester, the program was terminated. Since Fiedler had infantry training, he was assigned with thousands of other soldiers from the curtailed ASTP program to the 95th Infantry Division at Indiantown Gap, PA.

By September, the Division was in Normandy preparing for a move to the front. While Tom’s unit was waiting for that advance, he participated in one of the most famous logistics operations of the war. Plans to build a pipeline from Normandy to Paris has to be scrapped because the army was advancing so rapidly, consuming 800,000 gallons of fuel a day. To keep the vehicles moving, the army put together the Red Ball Express, a continuous convoy of 2½ ton trucks hauled fuel in 5-gallon jerry cans from Normandy to Paris. There was no stopping. If a truck broke down, it was pushed off to the side of the road.

Fiedler’s driving days ended when he moved with his division to front-line combat. Only three weeks later, he was hit with shrapnel from a mortar or artillery round. Most went through, but there was still a piece left inside.

“I was going to go ahead,” he said,” but when I went to grab my rifle, I couldn’t because my hand was stiff.”

That was the day before his birthday.

“They sent me back to an aid station. About six o’clock the next morning somebody shook me awake. I looked up, and there were chickens on his collar, a colonel. He said, “Is your name Thomas Fiedler?’ I said yes. He said, ‘Here’s your Purple Heart.’ That was my ceremony, and my birthday present.”

Tom ended up in a hospital in England, where they removed the shrapnel. After several months there, he was returned to limited service at a redeployment camp in France, where they processed soldiers to return home. He got back home to his home in Harmony, PA, in March, 1946, with his Purple Heart and a Bronze Star.