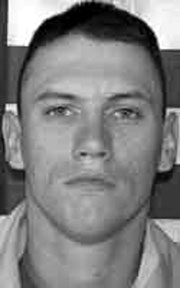 You can find dramatic narratives about the battles that were taking place when certain fallen heroes were mortally wounded. But there are some fallen heroes whose deaths don’t inspire movie producers to base films on their final moments.

One of those is Doug Kashmer, who enlisted in the army after graduating from Reynolds High School in 1996.

Doug wasn’t a combat infantryman who attacked machine gun nests with hand grenades or killed enemy soldiers in hand-to-hand combat. He was a diesel mechanic. In Nippur, Iraq, on June 8, 2005, he was killed when the military wrecker in which he was riding accidentally rolled over.
That doesn’t make him less of a hero, because it isn’t in death that one becomes a hero; it is in life. And it isn’t the result of what happens to a person. It is the result of the decisions that person made. A hero is one who is willing to risk his life for his family, his friends, and his country – who is willing to go anywhere and do whatever he is called to do, to the best of his ability, to protect his family, friends, and country.

That’s what makes his death different from the 43,510 traffic fatalities that occurred in the United States during 2005.

Doug was very young when he decided to be a soldier. According to his mother, Carol Kashmer, he liked to play with toy soldiers. He would say, “Mom, I want to be a soldier. That’s been his dream since he was a little boy.”

But it isn’t childhood dreams that make one a hero. A kid has no idea what being a soldier really involves. A hero is one who follows through when he grows up and learns the risks involved, and continues even when life brings more reasons for quitting – such as having a wife and a child. Doug was serving in Mannheim, Germany, before he was deployed to Iraq. His wife, Toni Tennant, and their daughter, Kashmaria, were living with him there.

Before leaving for Iraq, Doug had a picture of Kashmaria tattooed on his leg so she would be with him wherever he went.

Heroism comes from taking that picture with him into harm’s way while leaving the real Kashmaria and his wife in Germany, aware of the fact that they might never see each other again.