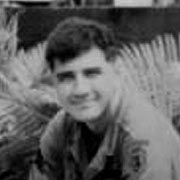 When Sgt. Thomas R. Marshall of Sandy Lake, PA, wrote home from Vietnam, he didn’t write about the horrors of war. He wrote about how beautiful the country and the people were. That’s not surprising, because he was an artist at heart. It takes an artist to focus on the beauty that can often be found in the midst of ugliness.

He enlisted in the army while he was a student at the Shenango Campus of Penn State University. According to his brother, Malcolm, he had received several draft notices and just got tired of being harassed. That was in June, 1968, two years after he had graduated from Lakeview High School in Sandy Lake.

“He was a very good artist,” Malcolm said. “He had a very bright future. And he was a super nice guy. He married Tracy Clark from Stoneboro a couple of weeks before he deployed.”

He headed for Vietnam on June 18, 1969, and was assigned to A Company, 2nd Battalion, 27th Infantry, 25th Infantry Division in Tay Ninh Province, near the Cambodian border. As time went on, it should have been an optimistic time for troops in Vietnam. On November 3, 1969, in a major policy speech on Vietnam, President Richard Nixon made a major announcement:

Withdrawal of American forces, including the 25th Infantry Division, did proceed. So did the intense combat, and the continuing deaths of American soldiers – including Sgt. Marshall, who was killed by small arms fire on December 11, 1969.

He was survived by his parents, Mr. and Mrs. Malcolm D. Marshall of Sandy Lake; his wife, Tracy; three sisters and a brother. 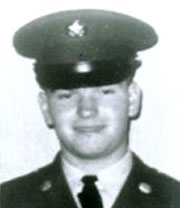 It was one thing to find an enemy unit in Vietnam. It was quite another to destroy it. When things weren’t going their way, the Viet Cong and North Vietnamese Army were very adept at slipping away into the jungle to fight another day.

The solution was to cordon off the unit – completely surround it so it couldn’t escape. The classic example of that was the action at the end of April and beginning of May, 1968, a couple of miles northwest of Huế.

Valentine Ambrose Ochs, a mortar man from Sandy Lake serving with the 101st Airborne Division, was involved in that action.

An enemy force of unknown size was discovered to be holed up in the village of Phuoc Yen, in a bend of the Song Bo River. Fortunately, the NVA forces inside the village also didn’t know the strength of the force that would be thrown against them. In the early hours of the operation, they could have escaped by attacking the first elements being put in place. Before they did, they were surrounded by companies from three American battalions, elements from local Popular Forces, and the “Black Panther” Company of the 1st South Vietnamese Army.

With the enemy completely trapped, the American forces attacked relentlessly with artillery, helicopter gunships, and Air Force figher-bombers. After five days, 107 NVA soldiers surrendered, leaving the bodies of 419 of their comrades in the village. By this time, our attacking forces knew that they had eliminated the 8th Battalion, 90th NVA Regiment. Until that day, no other NVA force had surrendered en masse to an American military unit.

Unfortunately, PFC Ochs did not live to see that happen. He was killed by small arms fire during the battle, just 28 days after he had arrived in Vietnam.

He was the son of Mr. & Mrs. Charles Ochs, Sandy Lake.

“Valentine Ochs was a kind caring young man. He loved his country and served it well. the news of Valentine Ochs’s death came on his dad’s birthday. All seven of his brothers and sisters will never forget their older brother. He was killed on April-28, 1968, a day that his family and friends will never forget.”