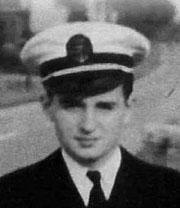 He graduated in 1947 from Brown University in Providence with a degree in electrical engineering and a commission in the Marine Corps Reserves. He came back to Sharon to work as an electrical engineer at Sharon Steel. In 1950, he founded his own E. Koledin Electric.

When he was called to active duty in 1951 to serve in the Korean War, he closed up his business. He served as an engineering officer in the 1st Marine Division’s Shore Party Battalion, which was responsible for construction, road building, and other combat engineering functions. He wrote home about how cold it was – sometimes 20 degrees below zero.

After the war, he told his children about how much he loved and respected his fellow soldiers and everyone underneath him. When he had the chance to go to Hawaii on R&R, all of his men wanted him to go, but he would not leave. He insisted on staying with his men.

“That’s how he was his whole life,” said his daughter, Tanya. “It speaks really as to how he was as a man.”

As he sailed back home from Korea in May, 1954, he knew he would have to start up his business again, but didn’t have the capital to do it. So he played poker, and won enough to restart his business. 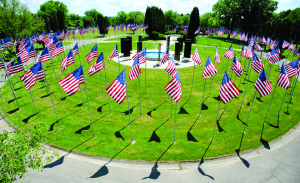 After reestablishing his electrical business, he opened Wesex Corporation as a general construction firm. Since then, Wesex has constructed many commercial buildings throughout the Shenango Valley and beyond. One of his favorite projects was the design and construction of the War on Terror Veterans Memorial in America’s Cemetery (formerly Hillcrest Memorial Park).

His love for his community and his country was expressed through his active involvement on many boards of directors, many civic organizations, and the Republican Party.

Through all this, he raised two families. He and his first wife, Claire, had two daughters, Janice and Kathleen, and one son, Emil (Butch). With his second wife, Kathy, he also had two daughters and a son: Teresa, Tanya, and Greg.

Emil passed away on May 24, 2o1o. He is buried in a place of honor near the War on Terror Veterans Memorial. 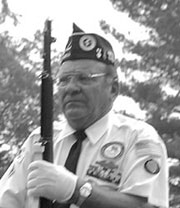 John Pariza was born in East Liverpool of Romanian parents, who took him for a visit to Romania before World War II. Because of Hitler’s aggression, the family was stuck there throughout World War II.

“When I was ten old,” Pariza said, “I saw Germans drag Romanian Jews out of their homes and shoot them in the head.”

After his family came back to Youngstown in 1946, kids in school made fun of him because of his broken English. At age 16, he beat up a couple of his antagonists and spent three days in a detention home. When he was 17, he quit school and joined the army.

That was just before the North Korean army invaded South Korea, quickly pushing the South Koreans back into a 100 by 50 mile rectangle at the southern end of the Korean peninsula – the infamous Pusan Perimeter.

Within hours of arriving there, Pariza was on patrol in a rice patty.

“We got ambushed,” he said. “Two of the guys that I just got there with got killed right off the bat.”

The newly-arrived U.S. and United Nations troops fought their way up the peninsula to China. Pariza suffered frostbite and two wounds. He was even a prisoner of war – for about 45 minutes during the early part of November 1950. Elements of the Chinese army had come south to reinforce the North Koreans. While on patrol, his 12-man squad unit was captured by a whole company of Chinese.

“They assigned eight Chinese to take us north,” he said.

Fortunately, nearby Turk and Greek units of the United Nations contingent had seen what happened. They attacked the Chinese with knives. Not one shot was fired.

Because of that rescue, Pariza was not one of the 2,900 Americans who died in Korean prison camps, nor one of the 8,100 who are still listed as missing.

“The Korean War is the forgotten war,” Pariza said. “I told my wife, if it’s the last thing I do, I want to put up a Korean War memorial.”

It took him a year and a half to achieve that dream. You can visit it in front of the Oak Tree Country Club, next to the Ohio line on Route 318 – now known as the Korean War Veterans Memorial Highway, also through John Pariza’s initiative.