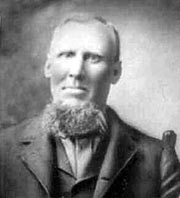 When Lewis Francis Brest was buried in Citizen’s Cemetery in Mercer December, 1915, few words were chiseled into his tombstone: “Prvt. Lewis F. Brest 57th Pa. Infantry.” There was no reference to his being awarded a Medal of Honor during the Civil War. Brest received his Medal for what became the signature action for which it was awarded during the Civil War. On April 6, 1865, near Petersburg, Virginia, Private Brest captured the enemy regiment’s battle flag.

During the Civil War, the battle flag was far more than a decoration. On the battlefield, it was extremely important. Without it, scattered soldiers would have no idea where to go; with it, they all could see the rallying point for their regiment. Because of its importance, it was carried and defended by the best and the bravest soldiers in the regiment. To capture it usually took the kind of fortitude one associates with a Medal of Honor.

Unfortunately, in the early days after it was created, the Medal wasn’t as esteemed as it is today because many were awarded for frivolous reasons. For example, 864 members of one regiment received the Medal when 300 of them reenlisted before they had even seen one day of combat.

Lewis Brest should have been proud of his Medal of Honor because he deserved it. However, he was probably prouder of his long service with the 57th Pennsylvania Regiment. Merely surviving was something to be proud of. At Antietam the regiment lost 98 killed and wounded, and three missing. In an assault on Marye’s Heights in the battle of Fredericksburg, they lost 87 out of the 192 soldiers engaged in the fight. At Gettysburg the undermanned unit lost another 34.

Brest remained active throughout the war except for the summer of 1963. Confined to the regimental hospital by a bout with typhoid fever, he missed the regiment’s action at Gettysburg. In the spring of 1864, he was wounded in the neck, but was back in action before very long.

When he received the Medal of Honor, he was probably happier about the thirty-day leave it earned him rather than about the Medal itself. He is honored today, however, because of the Mercer County Historical Society’s Western Pennsylvania Civil War Reenactors Society. Through their efforts, the United States government awarded Private Brest a new memorial headstone, engraved in gold with “Lewis F. Brest, ‘Medal of Honor’ Pvt Co ‘D’ 57 PA Inf. May 15, 1842 – Dec 2, 1915.”