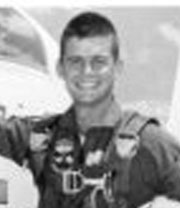 On November 29, 1970, Captain Cecil Gerald Moyer was piloting a C-123 aircraft that had just taken off from Cam Ranh Bay Air Force Base in Vietnam. Twelve miles south of the air base, the plane crashed in the jungle for undetermined reasons. The plane carried 32 Americans and 12 South Vietnamese. The Americans were officially listed as missing in action. When the plane was located on December 5, two non-commissioned officers were rescued from the wreckage . Further searches discovered the bodies of the remaining personnel. One of those was Captain Moyer.

Another C-123 crashed in the same vicinity several days before. All 79 people on that plane were killed.

Many years later, Captain Moyer’s wife, Sally, was serving as a Stephen Minister at Fort Sanders Regional Medical Center for many years. She came across an idea that inspired her: a portable chapel for use in patient rooms and family waiting areas throughout the hospital.

“It was something that just jumped out at me, something practical that was certainly needed by our patients, their family members and our own caregivers,” said Sally. “It was also a fitting memorial for my husband and those who died with him in service to our country.”

At the chapel’s dedication ceremony, the hospital’s chaplain, Jeff Ryan, made an observation that is too often forgotten. He pointed out that if Captain Moyer and those who died with him had lived, they would be getting ready for retirement and enjoying their grandchildren.

The Captain Moyer was born in Greenville to Mr. and Mrs. Cecil G. Moyer. He graduated from Greenville High School in 1963, and from Thiel College in 1967.

He entered the Air Force in 1967, and was assigned to the 315th Airlift Wing in Vietnam.