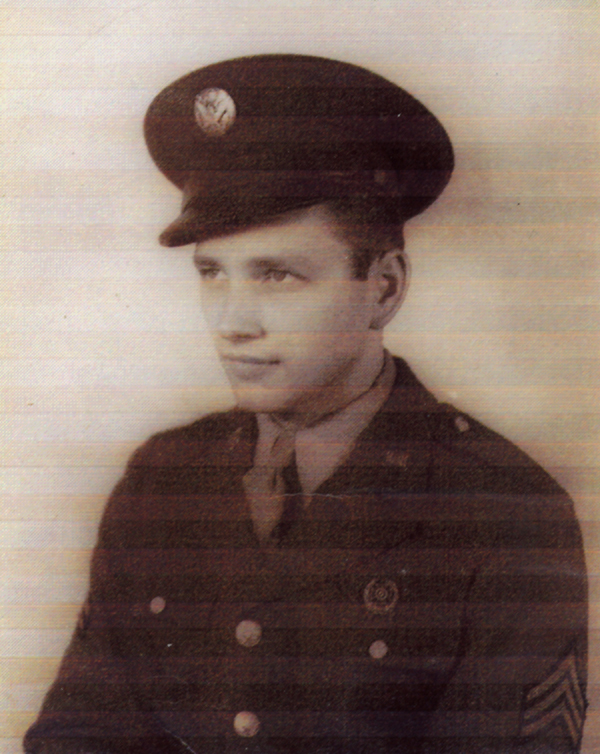 As the 164th Engineer Combat Battalion battled its way through Europe during 1944 and 1945, Claude Musgrove served as the unit’s photographer. He converted a captured German ambulance into a mobile dark room and made an enlarger using a condenser lens from a movie theater. 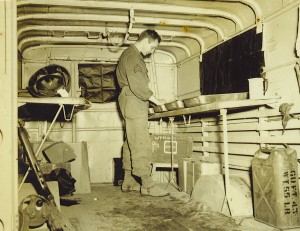 Inside of Claude’s mobile darkroom

Along the way, he photographed history in the making. His unit was among the first to enter Germany, crossing the famous Ludendorff Bridge at Remagen. Hitler’s army had failed to destroy the bridge as they were retreating, so 8000 troops of the 9th Armored Division crossed it within 24 hours after capturing it. Claude’s battalion was put in charge of defending the bridge. The Germans threw everything they could at it – bombs, artillery, even frogmen who swam down the Rhine to blow it up. They failed initially, but managed to damage it severely.

“The major in charge of the bridge told the Stars and Stripes that after ten days’ work it was stronger than it ever was. The next day it collapsed and killed him and twenty-three engineers,” Claude said. 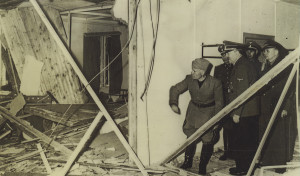 Claude did his best to preserve historical photographs he found in German government buildings. He found more than 500 photographs taken by Heinrich Hoffmann, Hitler’s personal photographer. One shows Hitler and Mussolini inspecting a room destroyed by a bomb in the failed assassination attempt of July 20, 1944.

Another photo triggered a personal memory for Claude. It shows Herman Goering, head of the German Luftwaffe, with Colonel Ernst Udet, the number two ace in World War I, after the Red Baron (Manfred von Richthofen).

“In 1935,” Claude said, “I saw him in person at the Cleveland Air Show. He was over here spying on our airports to see what we had. He flew a biplane upside down and picked up a handkerchief off the ground.”

Claude also had two books that each include a viewing apparatus and 100 stereoscopic photographs of Germany and the war. Another book on the history of the Nazis had actual glued-in photographs instead of pictures printed on the pages.

Claude returned to work at Westinghouse. After he retired in 1969, he and his wife Evelyn bought a motel in Clearwater, Florida, which they operated for nine years. After that, they spent winters in Florida and summers in Fredonia. Their family grew to include 18 grandchildren and 21 great grandchildren.

He bought his first computer when he was 88. He used it to digitize the many photographs he had taken and collected.