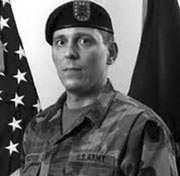 When you read the profiles of the men and women whose names appear on the Vietnam Memorial, you are overwhelmed with how young most of them were when they died – in their teens or early twenties.

Not so with the heroes of the War on Terror. Sgt. Daniel Brozovich, for example, was 42 years old when he died while on patrol in Ashraf, Iraq, on October 18, 2006.

The army of the late ‘60s and early ‘70s was made up mostly of draftees and young people who enlisted to fight in Vietnam. When the war there ended, so did military conscription. The last men drafted reported for duty in June, 1973.

So it was an all-volunteer army that fought in Iraq and Afghanistan. Many were career military reservists who were called to active duty.

That again was the case for Sgt. Brozovich. When he and his twin brother, David, graduated from Bedford High School in 1982, Danny joined the Marines and David joined the Air Force. Four years later, Danny moved back to Pittsburgh to work for Alcoa. But he still believed in an obligation to serve his country, so he joined the National Guard.

He married Mary June Stevens; they had a daughter, Carrie. Then he moved to Greenville to work at Werner Company. That’s where their second child, Ryan, was born. For a short time before his last deployment, he worked as a guard in state prisons, first in Fayette County and then in Findlay Township.

During his military career, Sgt. Brozovich served a tour in Germany and two tours in Iraq. Daniel’s father, Anthony, admired the way Danny’s wife handled it all, calling her a rock who supported her husband and held the family together. His final assignment was with the 107th Field Artillery Battalion in New Castle.

“When he was military, he was all military,” said his mother, Beth.

His compatriots in the army agreed with her. At the news conference in the National Guard Armory in New Castle announcing his death, Lt. Col. Grey Berrier II said Sgt. Brozovich was a charismatic leader who was “fully committed in word and deed to empowering the Iraqi people to pursue political and economic freedom. He was a man who “always led from the front.” Similar praise characterized his funeral service in Greenville.