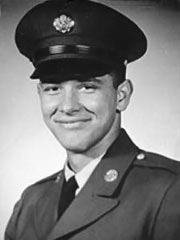 During the Vietnam War, body counts were reported almost daily, with Viet Cong casualties many times greater than American. For those whose loved ones were killed in the action, that was no consolation.

During June, 1966, the 4th Cavalry, supported by the 2nd Battalion 28th Infantry, conducted search and destroy operations in Binh Long Province, along the border with Cambodia, directly north of Saigon. The mission was to eliminate the 271st, 272nd, and 273rd Regiments of the 9th Viet Cong Division to secure Highway 13 and protect the city of An Loc.

On June 30, B Troop of the 1st Squadron 4th Cavalry Regiment was ambushed and severely damaged by the 271st VC Regiment. When the C troop and the 2nd Battalion 28th Infantry came in support, it turned into a three-day battle. By the time it was over, 270 Viet Cong soldiers were dead, compared with “only” 37 Americans.

The only thing that mattered to Mercer County was that one of those 37 was the radio operator for the Executive Officer of Company C, 2/18 Infantry, 1st Infantry Division. His name was Sp4 David E. Baun. He had been in Vietnam since May 20, 1966.

According to reports, Sp4 Baun distributed ammunition to the men of his unit with complete disregard for his own safety. He was killed while supervising the rescue of the wounded and the recovery of their equipment.

He was posthumously awarded the Bronze Star with “V” device for valor, and the Purple Heart.

David was the son of Mr. and Mrs. Wade E. Baun, Jackson Center RD2. He also left behind his wife, the former Pauline Werner, Easton, PA, whom he married April 23 a week before going to Vietnam.

Video of battle with 2nd Battalion 28th Infantry in Binh Long province in 1971, which gives an idea of what Sp4 Baun experienced on the day he died.