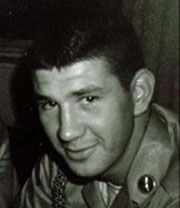 Dong Ap Bia is a mountain in Thua Thien Province, Vietnam, west south west of Hue, within range of North Vietnamese Army mortars positioned across the border in Laos. In military terminology, it was known as Hill 937, since it was 937 meters high. But it is best known as Hamburger Hill, largely due to a 1987 movie of that name.

The movie focuses on the actions of the 3rd Battalion, 187th Infantry, of the 101st Airborne Division as it assaulted the hill, which was heavily defended by the North Vietnamese Army from interconnected trenchworks and bunkers. But that battalion was just one of three American army battalions and two battalions of the South Vietnamese Army to attack it, reinforced by an awesome accumulation of U.S. air power and artillery. One of the American units was the 101st Airborne’s 1st Battalion, 506th Infantry.

David Garth Finnegan was a sergeant in that battalion’s A Company.

The attack on Hill 937 developed during an attempt to clear the A Shau Valley of North Vietnamese elements. The valley was a vital link in the NVA’s resupply routes for men and materiel into the South. Before the battalions operation began, there was little reliable intelligence about the strengths and dispositions of the NVA. What they found on Hill 937 was a NVA elements solidly emplaced in an interconnected series of bunkers and entrenchments.

The American commanders thought at first that it was defended by a company-sized force. When the 3/187th Infantry ‘s assaults from the south were repulsed time and time again, the 1/506th was sent to attack from the north.

The American and South Vietnamese forces not only had to deal with the enemy, but also with the terrain and the weather. The steep hillsides turned to mud, making progress nearly impossible. It ended up taking ten days to reach the summit, in spite of 272 attack sorties by the Air Force, more than a million pounds of bombs, and 152,000 pounds of napalm. Up there they found more than 630 dead soldiers from two NVA battalions.

Why is a question which must often remain unanswered.