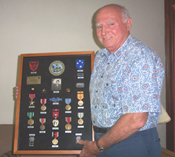 What’s a hero? Don Eichelberger says it’s anyone who just does his job when he’s ordered to do it, and doesn’t crawl down into a hole. But men like Eichelberger always apply that to the guy next to him, never to himself.

During 600 days of combat with the Americal Division in the Pacific, crawling into a hole was rarely an option for Eichelberger, unless it was one occupied by enemy soldiers. Starting on the island of Bougainville, he fought as part of a twelve-man reconnaissance squad responsible for going out in search of enemy units.

During November, 1944, his patrol discovered an enemy encampment early in the morning. They called in an infantry unit, and an entire unit of 23 enemy soldiers were killed without a single American casualty. Everyone who participated in the raid was honored with a Bronze Star. According to the citation, “The courage and jungle craft displayed by all members of the patrol is especially meritorious. The careful preparation, skillful execution, and deadly accuracy of fire constitute a masterpiece of jungle fighting.”

After Bougainville, Eichelberger’s recon squad went out on patrols through the torturous jungles of the Philippine islands of Leyte, Cebu, and Negros, sometimes for as long as twenty days. With feet continuously wet from slogging through the jungle, Eichelberger had to be hospitalized for treatment of ulcers on his ankles. He also contracted malaria.

After Negros was considered clear of enemy soldiers, Eichelberger’s unit started amphibious training for what would have been the most devastating and terrifying beach assault ever: the invasion of Japan itself. He is thankful that the atomic bombs on Hiroshima and Nagasaki made that unnecessary.

Eichelberger spent three months in the occupation of Japan, then returned home.

“My welcoming was walking into the house and being embraced by my parents. I didn’t have any bells ringing or parades and what have you.”

So was Don Eichelberger a hero? If you ask him, he’ll tell you no.

But re-read his own definition of a hero, and make up your own mind.