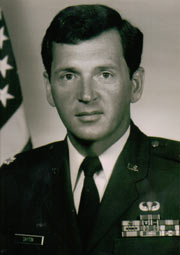 Fr. Douglas Dayton served in the Episcopal Ministry for 20 years – three years as Assistant Rector at St. John’s Episcopal Church in Sharon, and seventeen as Rector. That’s quite a career, especially considering the fact that he didn’t start studying for the priesthood until he was 43 years old, after completing a twenty-year career in the United States Air Force.

“People who know how much I love the ministry would say to me, ‘I bet you wish that you had gone into the seminary right out of college,” Fr. Dayton says. “But I tell them that those 20 years in the military, particularly my tour in Vietnam, helped me to be a much better priest and pastor.”

That career path took a little twist because of the Vietnam War.

“I got on board with the Air Force’s Officer Training Program,” he said. “I became a 90-Day-Wonder at Lackland Air Force Base in Texas.”

His Air Force Specialty was, appropriately, Education and Training. After assignments at Lackland and Hamilton Air Force Bases, he was sent to Nha Trang Airbase in Vietnam as education and training adviser to the Vietnamese Air Force’s 2nd Air Division.

“When I got there, the U.S. 7th Air Force personnel were running the airbase. Our job was to train the Vietnamese to be able to run the airbase by themselves. I was involved in a variety of training programs.”

U.S. advisers worked one-on-one with a Vietnamese counterpart. To be successful, the two had to develop a trusting, friendly relationship.

“My counterpart invited me to his home for dinner once,” Fr. Dayton said. “I tried to eat what I thought I could handle, but he made sure they served some that I could.”

After returning from Vietnam, Major Dayton taught four years at the United States Air Force Academy in Colorado, then served at Wright-Patterson AFB, Ohio. Before retiring as a Colonel, he served as Professor of Aerospace Studies for the Air Force ROTC Detachment at Grove City College.

And that left him ready for his career as a pastor and priest.