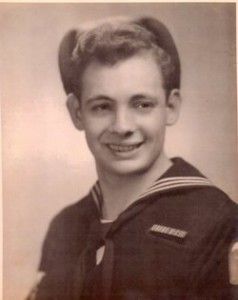 That’s what World War II veteran Earl Abbott said when he was asked about his military service.

The ship was the USS Henrico, named after the oldest county in Virginia, was 492-ft long Attack Transport that carried 5,500 tons of cargo, including as many as 28 landing craft, 1500 troops, and assault equipment. There certainly is a lot to write about the service of this truly remarkable ship, from her commissioning in 1943 to her retirement in 1968. However, it’s not possible to write about the ship without telling the stories of men such as Earl Abbott who served as her breath and her heartbeat. Abbott was aboard her only a few of those years, but they were among the most critical.

Abbott was drafted out of high school in March, 1943, to serve in the Navy. After his initial training, he served his whole time aboard the Henrico. He was with her when she participated in the D-Day Normandy invasion and in combat landings in the Pacific.

Barely six months after she was commissioned, she launched twenty-four of the first landing craft to hit Omaha Beach on D-Day during the greatest naval invasion in history.

Earl was Coxswain (driver) of one of those landing craft, loaded with a platoon of soldiers. Many of the craft couldn’t make it all the way to the beach, but Abbott was more fortunate.

His troops stepped out onto sand, but their fate wasn’t much different from those who had to wade or swim ashore.

“We didn’t know we were going on a suicide mission,” Earl said. “I think the First Division infantry soldiers, who went to hell and back [during the invasions of North Africa and Italy] already knew it.”

So did those who planned the invasion.

“The Coxswains were given a .45 automatic pistol during the invasions. It wasn’t to protect us from the enemy. It was to make sure all the soldiers left the boats at the beach. We never had to use them. That’s the kind of soldiers they were, ready to die if they had to.”

With her troops ashore, the Henrico received casualties from the beach, returning them to southern England later that day. For the next two weeks, she shuttled troops back and forth between England and France. 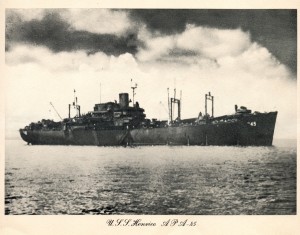 Then she set sail for the Mediterranean. After arriving in Italy, she participated in amphibious rehearsals before landing troops during the invasion of southern France. She supported operations in the Mediterranean for the next three months, then she sailed back to the United States to prepare for combat in the Pacific.

By the end of March, 1945, she was engaged in the landings on Kerama Retto, islands needed as a base of operations to support the invasion of nearby Okinawa. Then, on April 2, the USS Henrico was hit by a Japanese suicide plane carrying two 500-lb. bombs. Forty-nine officers and men died as the entire bridge was blown off the ship.

“I got relieved just before it happened. The guy that relieved me didn’t even know what happened,” Abbott said.

With the ship in flames, and without power to drive the fire fighting equipment, the entire crew put forth a heroic effort to save it.

“We had no water; we couldn’t put the fire out. So we did the best we could. We tried to pump water with hand bilges from the ocean to put the fire out. We got all of the fire extinguishers out of the boats that we could get, and then a destroyer came and helped us with their water. If they hadn’t come, we would have gotten blown up. We were loaded with ammunition, too. And then when the destroyer couldn’t help us anymore, we couldn’t abandon ship because we had no power. We couldn’t lower the boats. So we were drifting all night, and our only chance was for everybody to pitch in, and we put the fire out.”

The Henrico managed to return to Kerama Retto, then sailed to San Francisco under her own power. She arrived there on May 13 and was restored to full service by September. She sailed again with replacement troops to the Philippine Islands. Finally, after having carried troops into the teeth of the enemy, she performed the infinitely more pleasant task of bringing thousands of troops home from the Pacific when the war was over.

Earl Abbott’s military service ended when he was honorably discharged on February 10, 1946. The Henrico’s career, however, continued for another 22 years. She took part in the atomic bomb testing at Bikini Island in 1946 and supported American troops in Tsingtao, China, during 1948-49. During the Korean War, she landed troops at Inchon and provided continuous support of combat operations. She evacuated Nationalist Chinese troops in the Straits of Taiwan in 1954, and supported operations in the Caribbean during the Cuban missile crisis in 1962. She sailed her final combat missions during the Vietnam War, landing troops at Da Nang and Chu Lai.

Between all these outstanding accomplishments, the USS Henrico kept U.S. and allied armed forces combat ready by participating in countless training exercises. After her distinguished career, she was decommissioned and placed in reserve on February 14, 1968. She was disposed of in October, 1979.

The USS Henrico was awarded three battle stars for service in World War II, nine for the Korean War, and four for Vietnam – a total of sixteen. Every crew member who manned her during war and peace should be as proud of her as Earl Abbott is – and even prouder of themselves.