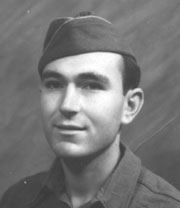 For Ed Kochis and his quartermaster unit in North Africa, the major threat to survival wasn’t enemy attack. It was meeting the ordinary needs of everyday life, such as food, water, and shelter.

They had c-rations – at least, when the supply ships weren’t sunk. They had to scrounge food any way they could, and buy it from the locals. One staple was a hard bread that the Arabs soaked in wine.

“We didn’t have any wine,” Kochis said. “We seeped it in onions and water. I went from 225 pounds down to 185. We had one canteen of water a day to bathe and drink.”

For a year and a half, the 76 men in his unit slept in pup tents. Each soldier had a shelter half, so two had to get together to make up a tent. Kochis and his tent mate were both over six feet tall. When it rained, they had to put their duffle bags outside to keep our feet dry.

The unit’s living conditions improved after they moved to Italy, near Foggia. Some of his friends managed to “requisition” cots and some walled tents that could sleep five or six.

The closest Kochis got to the front lines was about ten miles.

“But that was close enough,” he said, “because the ground would shake when big bombs would go off. We had a few bombs dropped near our air field. But we were pretty lucky that way.”

Some of Kochis’s friends were not as lucky. On a day off in Foggia, he went to the movies. “While I was in the movies, I heard this fellow laughing. I said to my buddy who was with me, ‘That sounds like a fellow from Greenville.’ I hollered, ‘Hey, Bill Doyle!’ He said, ‘Who is it?’ I said, ‘Ed Kochis.’

Doyle was a B-17 pilot stationed about ten miles from Kochis. They saw each other a couple of times a week for several months. Then he didn’t show up. He had been fatally shot down over Czechoslovakia.

Kochis’s last few months in the army were nothing like his years overseas. As a PT instructor in Texas, he led calisthenics, played softball twice a day, and had the rest of the day off.

Returning home in 1945, Kochis got a job at the Greenville Motor Club, which became the Mercer County Motor Club. He remained as head of that organization for 41 years.