In 1969, a year after graduating from Greenville High School, Eric Knauf enlisted in the army “because it was the right thing to do.” During his initial testing, he qualified for helicopter flight school.

“They told me the washout rate was very high,” he said, “and then a very high death rate if you didn’t wash out. I said that’s okay.”

After training, Warrant Officer Knauf was assigned to an air cav unit in the Mekong Delta. At Christmas time, the unit moved us up to Quang Tri Province, by the DMZ.”

There they participated in Operation Lam Son 719, a major invasion of Laos by the South Vietnamese Army, with aerial support from the U. S. Army. 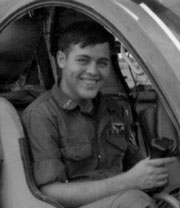 “All we did all day, every day was go out and get into a fight,” he said.

A helicopter would fly into known enemy territory to draw fire. Other gunships would follow them in and attack the positions from which the enemy was firing.

“Our mission was to go find them and shoot as many as we could and come home at the end of the day.”

But as he had been warned, the casualty rate for helicopter pilots and crew was high indeed. Some days not everyone came home. On February 27, 1971, that included Eric Knauf.

“We were trying to get two pilots out of Laos,” he said. “The first rescue mission got shot down. We went in right behind them and got shot down, too. Another mission was able to get us out. The first two pilots are still listed as missing in action.” 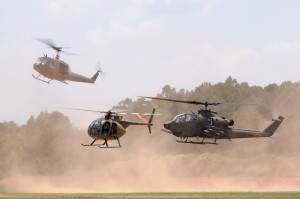 Besides offensive missions, they also had to defend their base at Khe Sanh.

“They would fire mortars on us every night. We mounted C-130 landing lights and a minigun on a helicopter. When we saw the mortar flash, we would light up the whole area and hit the minigun. Their position disappeared, trees and all.”

Eric was one of the fortunate ones. He survived an astounding 1318 flight hours, including 1081 in combat. From that he accumulated what he calls a bunch of junk in this basement that includes three Distinguished Flying Crosses, a pile of Bronze Stars and Air Medals (31 of the former, 36 of the latter, including three for valor), and a Vietnamese Cross of Gallantry.