Gary Burr enlisted in the Navy for two reasons: so no one could tell him what to do, and to get the heck out of his little hometown of Prescott, Arizona, which he refers fondly to as Biscuit. He succeeded in the second goal, and learned that enlisting in the armed forces is not the best way to avoid getting told what to do.

Gary was born in the mile-high town of Prescott in 1960. Like many folks growing up in a small town, Gary heard the call to leave and see the world. Since everyone knows everyone in a small town, the Navy recruiter took all the willing seniors on a road trip to San Diego “to show how fun it was to be in the Navy.” Gary was sold on the idea. He was not eighteen at the time, but his dad gladly drove him to sign up for the Navy. On August 17, 1978, Gary went to San Diego Naval and Recruit Training Center for boot camp. He thought he had it made when they handed him sunscreen. Little did he know! He says that from the time he arrived until he left, instructors were yelling constantly in his face. At times Gary felt uncertain about his decision to join, but he did not give up.

“The instructors were supposed to make you feel like worms and scum,” he said, “trying first to tear you down and then proceed to build you up. You would do as you were told without hesitation or questions.”

Basic training consisted of learning to follow orders, firefighting training, ship dynamics, physical training, and a load of bookwork. One of the most eye-opening aspects for Gary was the diversity in religion and ethnicity. Gary attended a non-denominational church at camp with many other sailors from other religions.

When his mother sent packages to boot camp, the instructors opened them in front of all the other recruits to embarrass him, and gave his mother’s prized goodies away to everyone. However, after tasting his mom’s and Tutu’s goodies, all looked forward to Gary receiving care packages.

The worst memory Gary has is being in boot camp for his 18th birthday. He remembers looking out across the base. Off in the distance he could see sailboats and restaurants while he was performing grueling exercises.

After boot camp, Gary went to Data Processing School in San Diego for three months to learn about computers and operations. Although he despised boot camp, he thoroughly enjoyed his data processing school.

Gary’s years in the Navy were a time of “peace” for the United States, but the Cold War was very real. Gary’s first orders put him on the USS San Jose, a combat stores ship which carried supplies and ammunition to carrier task force groups at sea and U.S. installations in the Far East.

Being from the landlocked state of Arizona, Gary had rarely gone out to sea; an occasional deep sea fishing trip was the sum of his sailing experience. Gary’s biggest enemies on the ship were squawk boxes (radio communications boxes). Being a tall man, he was always cracking his head on them as well as the hatches. Sleeping arrangements were not much better. There were three racks stacked on each other with three-inch mattresses, and if you got the top you would have a little locker. Being the newbie Gary had to take the top bunk. The fluorescent lights stayed on all hours. Gary says with that the food was good if you like rice, fish, and tuna surprise. Lucky for him, he liked tuna surprise, but he has never had it since because his wife despises it.

While on the USS San Jose, Gary went on two Westpac (Western Pacific) cruises. The first cruise started in San Francisco then went to Hawaii, the Philippines (Subic Bay) Hong Kong, Singapore, Diego Garcia, and Mombasa, Kenya. By the time Gary finished his first duty he was a Data Processing Technician E-5.

Gary does recall a few tense times. While headed to Australia, the ship was turned around and sailed to the coast of Iran where it stayed for six months. On November 4, 1979, a mob stormed the U.S. Embassy in Tehran, taking 52 Americans hostage. President Jimmy Carter ordered all military in that region to go to the Gulf of Oman for a show of force. on November 20, 1979, a radical Islamic faction took over the Grand Mosque in Mecca. The Ayatollah Khomeini broadcast over radio the lie that Americans were behind the occupation. A mob in the Pakistani capital, Islamabad, burned the U.S. Embassy to the ground, killing a United States Marine, an army warrant officer, and two Pakistani staff members.

Gary’s ship pulled into Karachi, Pakistan, and a landing party got off. Militants with automatic rifles immediately surrounded them. The next thing Gary knew, the ship had to pull out immediately without retrieving the landing crew. To this day Gary does not know what happened to them.

During this time the United States Navy and the Soviet Navy circled around each other out in the Gulf of Oman.

“They had their show of force and we had ours,” Gary said, “but it was as boring as if could be.”

He and thousands of other sailors spent Christmas of 1979 in the middle of the Gulf of Oman.

The hostages in the Tehran embassy were held for 444 days until January 20, 1981, the day Ronald Reagan was sworn in as President.

Before and after its deployment in the Gulf of Oran, the USS San Jose saved two groups of Vietnamese “boat people” in the middle of the South China Sea. One of the times there were 48 refugees in one small fishing boat. The second time the boat had 45 people aboard.

“They would set out from Vietnam into the shipping lanes hoping to be rescued,” Gary said.

The maritime rules stated that a ship does not have to stop to help another ship unless they are in distress, so sometimes the boat people would set their ship on fire not only be seen, but in desperation to be saved. Men, women and children of all ages were rescued by Gary’s ship. Most were suffering from dehydration and lack of food. Sadly many of them had died before they could be saved.

Gary with some of his buddies

Although Gary didn’t have any friends in boot camp, he did make lifelong friendships with some of his shipmates. Joe Mayuex, Peter Kronberg and Greg Grandon are still in contact with him today. Gary, Peter and Joe see each other every couple of years, and all of them stay in touch using FACEBOOK.

While in Mombasa, Kenya, Gary went on a walking safari.

“Poverty was so bad,” Gary said, “that the people would trade beautiful carvings for the most basic goods.”

The sailors would trade T-shirts, Levis, and the sheets off their beds. Gary traded his Stanford T-shirt for a pair of giraffe carvings. These carvings still have a prominent place in his home today.

When Gary wasn’t exploring his surroundings he ran the supply operations and data entry.

In 1981, the ship was stationed in Guam. Gary could walk through the shallow water to another island about a half a mile away and see tropical fish without snorkeling. While on the ship Gary played his guitar, which he still plays. But duty there wasn’t always fun. One time on the ship Gary and his friend Peter had to paint the storeroom. They were in a tight space; after a couple minutes, they found themselves on the floor feeling as if they were stoned. Fortunately they realized what was happening and were able to get out of there before the paint fumes could do more harm.

While out to sea, the ship laundry (one level down from the deck) caught fire. The washing machine motors contained magnesium, very easy to light but impossible to put out with water. The magnesium burned through the bottom of the washing machine and proceeded to burn through the deck to the one below. It was apparent that if something weren’t done quickly, the magnesium would burn all the way to the hull. The engineers came up with the idea to get a big metal tray and fill it with sand. The magnesium burned through two decks before landing in the sandy tray. By the time it was out the sand had turned to glass.

In Guam, Gary requested orders for shore duty. He received order to Naval Regional Data Automation Center (NARDAC), North Island, San Diego, California, where he a computer programmer for IBM, Burrows, and UNIVAC systems. In 1981, Gary was able to spend Christmas with his family in Prescott.

After serving in the Navy for five years, Gary felt it was time to leave. As Gary puts it, it was “out of the fire and into the frying pan.” He was awarded Humanitarian Medal, Expeditionary Medal, and an honorable discharge. He and his shipmates also were awarded a key to the city of San Jose, California, where he can go to any bar at any time and have a free drink. 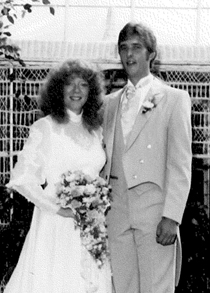 The best memory Gary has to this day is meeting Paula his wife. “She waved to me and the rest, as they say, is history. Since then my life has never been the same,” Gary says with a twinkle in his eye. They married two weeks after he was discharged. Paula still had one more year to serve in the Navy before she, too, would get out.

Gary’s first job after the Navy was at Solar Turbines in San Diego, where his experience earned him double pay. When Paula was honorably discharged they moved to Phoenix, Arizona.

Gary considers the Navy a life-learning lesson. The most valuable lesson Gary learned was work ethic. “The Navy instills in you the importance of good work,” he said.

Gary still lives in Phoenix today with his wife, Paula. He is a father of four − Brielle, Danielle, Janelle, and Ethan – with a grandson Tanner and a granddaughter Kinsley.

His job today is Technology Infrastructure Architect for American Express.

To this day he never regrets joining the United States Navy.