It’s impossible to understand the strength and courage that enables one to perform in such a way as to merit the Medal of Honor. You might get a glimpse of it by considering the actions of Greenville native Gus Kefurt.

His excellence as a soldier is evident from the fact that barely four months after he joined the army in August, 1944, he was already a staff sergeant in Company K, 15th Infantry Regiment, 3rd Infantry Division in France. That excellence is confirmed by his Medal of Honor citation:

“He distinguished himself by conspicuous gallantry and intrepidity above and beyond the call of duty on 23 and 24 December 1944, near Bennwihr, France. Early in the attack S/Sgt. Kefurt jumped through an opening in a wall to be confronted by about 15 Germans. Although outnumbered he opened fire, killing 10 and capturing the others. During a seesaw battle which developed he effectively adjusted artillery fire on an enemy tank close to his position although exposed to small arms fire. When night fell he maintained a 3-man outpost in the center of the town in the middle of the German positions and successfully fought off several hostile patrols attempting to penetrate our lines. Assuming command of his platoon the following morning he led it in hand-to-hand fighting through the town until blocked by a tank. Using rifle grenades he forced surrender of its crew and some supporting infantry. He then continued his attack from house to house against heavy machinegun and rifle fire. Advancing against a strongpoint that was holding up the company, his platoon was subjected to a strong counterattack and infiltration to its rear. Suffering heavy casualties in their exposed position the men remained there due to S/Sgt. Kefurt’s personal example of bravery, determination and leadership. He constantly exposed himself to fire by going from man to man to direct fire. During this time he killed approximately 15 of the enemy at close range. Although severely wounded in the leg he refused first aid and immediately resumed fighting. When the forces to his rear were pushed back 3 hours later, he refused to be evacuated, but, during several more counterattacks moved painfully about under intense small arms and mortar fire, stiffening the resistance of his platoon by encouraging individual men and by his own fire until he was killed. As a result of S/Sgt. Kefurt’s gallantry the position was maintained.” 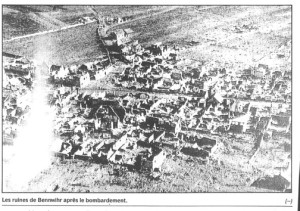 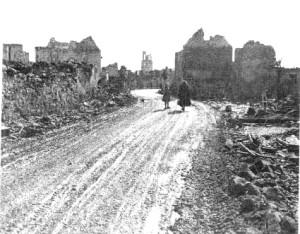 S/Sgt. Kefurt was buried at the American Cemetery and Memorial in Épinal, France. 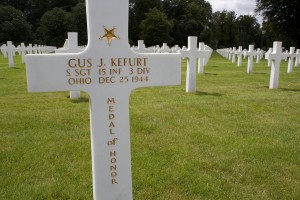