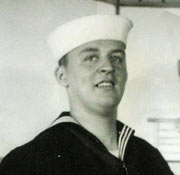 The men close to her called her by the sweet and simple name Sara, but she was anything but sweet or simple. Although she was only 16 years old when the war started, Tokyo Rose called her the old lady. She survived nearly fatal wounds at Iwo Jima on February 21, 1945, only to die a most inglorious death after the war at the tender age of 21.

She was the USS Saratoga (CV3). The New York Shipbuilding Company laid her keel in 1920 as a battle cruiser. World War I had just ended, and imaginative military minds were beginning to envision airplanes flying into combat from the deck of a ship. So in 1922 the Navy decided to convert her into an aircraft carrier.

The first planes to land on her deck were small, slow biplanes, a far cry from the fast and deadly fighters she later carried into combat. While participating in naval exercises before World War II, Sara was instrumental in developing strategies and tactics for a kind of warfare that had never been seen before.

When the Japanese attacked Pearl Harbor on December 7, 1941, Sara was in San Diego. She sailed immediately for the South Pacific, refueling in Pearl Harbor before continuing on toward Wake Island.

On January 11, 1942, the Saratoga received her first battle wounds and crew casualties. A torpedo from a Japanese submarine hit her without warning. Six of her crew were killed. She managed to limp back to Hawaii under her own power. She then headed for Bremerton, Washington, on the Puget Sound, for permanent repairs and the addition of improved anti-aircraft guns.

She entered her first intense combat operations in August, 1942, when she launched planes in support of the assault on Guadalcanal. Her planes sank the Japanese carrier Ryujo and damaged the Chitose, a seaplane tender. A week later the Saratoga had to return to Hawaii for repairs after being damaged by a Japanese torpedo.

Sailing from Pearl Harbor on November 10, Sara spent the next year and a half in combat operations in the South Pacific. She provided air support for some of the most legendary island invasions, such as Bougainville, the Marshalls, Eniwetok, and Engebi.

In November, 1943, the Saratoga left the main theaters of the war for nearly a year to participate in exercises with less experienced British and French aircraft carriers. After intensive training, the Saratoga and the British carrier HMS Illustrious conducted very successful attacks on port facilities and oil reserves on Sumatra. In June, 1944, Sara returned to the Bremerton dry docks for repairs.

That’s when Sharon native Harry Jones joined her crew. He had enlisted after completed tenth grade at Sharon High School.

“We lived on Oakland between Hall Street and Oakwood Cemetery,” he said. “When I came home from enlisting, I had to walk up Hall Street. When I turned the corner onto Oakland, my mother was standing on the porch steps. I think I could see the tears coming out of her eyes. I was full of joy yippying and hollering and she felt really bad. I never got over that. She was so sad.”

Jones was supposed complete six weeks of training at Great Lakes Naval Station, but the Navy was so short of men that he spent only three weeks there. After a week’s leave at home, he headed for Bremerton to join the crew of the Saratoga. While the carrier was being repaired, Jones trained to be a plane captain at the naval air station in Arlington, Washington.

When Sara left Washington in September, 1944, headed for Pearl Harbor, Jones found himself in a different world – one with incredible highs and lows.

“I was out at sea for nine months,” he said, “never saw a pebble, never saw a tree. I’ve been an outdoorsman all of my life. I couldn’t stand it down in the hold. I slept up on the deck right beside the plane. Not all the time, but quite a bit of time. The best time of my life was to see that sun go down in the water and see that moon come up. I tell you, there is nothing in this world could beat that. I enjoyed that every day and every night.”

Well, almost every day and night. There were times when the weather turned a little ugly.

“In a typhoon, I’ve seen that ship roll over to where the side of the ship was running right along the water. I don’t know why it didn’t go right over. That bow would go down under the waves, and the propellers would come up clear out of the water. It was like you were on a roller coaster.”

As plane captain, Harry was assigned to one plane. His job was to maintain it and prepare it for combat operations.

“I spent all my time up on deck with my plane,” he said. “I had to inspect it every day. The checklist had 58 items on it. You couldn’t skip any of them. If that plane just sput when it was taking off, it went right down into the water. Then they only have three minutes to get out of that cockpit before she went down.”

To make sure the plane wouldn’t sput while taking off, he had to get into the pilot’s seat and start it up every day.

“The spark to start it came from something like a shotgun shell,” he said. “You had to rev it up to 1500 rpm to see if it would spit or sputter. Sometimes the plane was real close to the edge of the deck. You would look down and all you would see is water. That thing would be bouncing up and down. You’d look over and think you’re going to take off or fall into the ocean. It scared the hell out of me.”

Harry and his pilot, H. C. Palmatos, weren’t the best of friends.

“He came in one day and said this plane is slowing down. He had me scrub it all down with diesel oil. He said it made it go a couple of knots faster.”

For several months at Pearl Harbor, the Saratoga trained night fighter squadrons and developed the techniques and tactics of night flying. Then on January 29, 1945, she headed out with the USS Enterprise to provide day and night aerial support for the invasion of Iwo Jima.

Jones was thrilled by the sight of the fleet.

But Jones wasn’t the only one watching the fleet in general, and the Saratoga in particular. The Japanese were watching it, with a focus on the USS Saratoga..

“Tokyo Rose would come on the radio every night and they would play it over the public address system. She would say, ‘We’re looking for you, old lady. We know where the old lady is at. We’re going to get you.’” 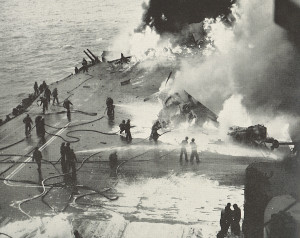 On the fateful day of February 21, 1945, Tokyo Rose’s compatriots made good on her prediction. Jones prepared his plane for combat. The pilot, H. C. Palmatos, took off to attack the island. Then, at 1700 hours (5 pm), all hell broke loose. The Japanese hit the Saratoga with the most intense assault of the war against a warship. Within three minutes, they hit the Saratoga with five bombs.

“The first thing they dropped was a skip bomb, then a suicide plane came right after. It made a hole you could drive a semi through, right at the water line. The Saratoga had a closed-in hangar deck. They put a bomb right in there.”

During the fight, which lasted two hours, Sara was strafed with machine guns and hit with seven bombs. Five Kamikaze suicide planes dove into her, their bombs causing huge explosions. Somehow Sara managed to keep afloat and sail away from the battle zone.

The attacks killed 123 men and wounded scores more, including Jones, whose duties required him to be on deck.

While fighting the many fires, Jones remembers running with the bullets from Japanese fighters tearing up the deck on both sides of him. He was hit in the back with a piece of shrapnel.

Two days later, U.S. Marines raised the flag on the top of Mount Suribachi. That is forever memorialized in one of the most famous war monuments in the world. When Sara’s crewmembers see it, they remember their part in the battle. Without setting foot on Iwo Jima, they helped to make that victory possible.

When Jones talks of his worst memories, he doesn’t describe the actual battle. He talks about the aftermath. 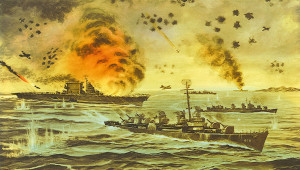 Painting of the Saratoga at Iwo Jima

“We stood on deck all day while we buried the dead at sea. That’s the worst thing I had to do in all my life was to stand up there, burying my buddies and friends.”

He also remembers the long voyage back to the United States for repairs.

“You could never get rid of that smell, burnt flesh. You remember it for the rest of your life.”

That was the end of combat for Sara, but not the end of her service. Fully repaired by May 22, she sailed back to Pearl Harbor and resumed pilot training until the Japanese surrendered on August 16. She was then transformed from an aircraft carrier into a magic carpet, bringing veterans back to the United States from the South Pacific. Before the end of Operation Magic Carpet, she had brought 29,204 veterans home, more than any other ship.

After the war, the USS Saratoga was rendered obsolete by larger, more modern carriers. She had one more bit of service to perform, however – not as a hero, but as a victim. In 1946, the United States conducted nuclear bomb tests at Bikini Atoll. They sacrificed Sara to determine the effects of the atomic bomb on naval vessels. She was sunk by an underwater bomb detonated 500 yards away.

To those conducting the testing, the USS Saratoga was an inanimate floating conglomeration of metal that deserved nothing more than to be sacrificed in the name of progress. But to the sailors and airmen who served on Sara, she was a very personal friend and fellow combatant.

Plane Talk, the Saratoga’s newspaper, described that crew on Thanksgiving, 1943: “Aboard the Saratoga we have the gol’darndest collection of farmers, bakers, saxophone players, carpenters, machinists, lawyers, school teachers, insurance men and Texas cowboys that ever assembled aboard a flat-top.”

The paper also summarized their respect for Sara herself: “The Saratoga is more than a ship; it is an idea and a dream. . . . Since the day when the Saratoga first hit the waves until now, it has existed but for one purpose: to protect the freedom to which we as a nation are pledged.”

Sara is at the bottom of the Bikini Atoll, and most of her crew are gone, but her dream, her legacy, deserves to endure. The next time you look at the Iwo Jima memorial, pay tribute not only to those Marines who raised the flag, but also to Sara, her crew, and all the sailors, airmen, and soldiers who helped make that possible.