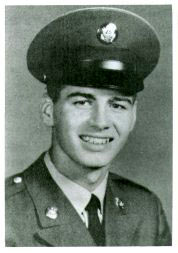 Sp4 Jesse James Coon had a rare assignment in Vietnam. He was assigned to the 9th Infantry Division Headquarters and Headquarters Company – to play in the division’s band. The 9th Division had a long tradition of bands in combat zone. They had one all the way back in World War II.

One might think that it would be a cushy assignment, away from the dangers that the 9th Division soldiers faced every day as part of the Riverine Force in the Mekong Delta. But the Headquarters and Headquarters Company and Band received a Meritorious Unit Citation, not for playing good music, but for support of combat operations.

He was posthumously promoted to Sgt. E-5 and awarded the Bronze Star with “V” device for valor.

Jesse was born in Sharon on August 30, 1947, to Billy Coon Jr. and Mrs. Anna Roman Coon. He attended Farrell High School, but graduated from Hickory High School in 1966. He worked for Sharon General Hospital, Cohen’s Store, and the General American Transportation Corp. before entering the service in October, 1966. His tour in Vietnam started on February 5, 1968.

A message posted on the Internet expressed the feelings of many who came back from Vietnam: “I remember Jesse in basic training. He was always making the rest of us laugh. I am very sorry he died so young. I served in Viet Nam too, and sometimes I feel guilty that I came home and so many didn’t.”