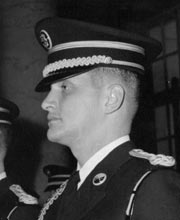 In the army, even if you don’t know where you’re going, you might end up exactly where you were meant to be – provided you have a broom, a passion for doing things perfectly, and a loving grandmother.

At least that’s how it worked for one draftee. When Jim Cardamon received his draft notice in 1956, a friend who attended the Citadel taught him close order drill using a broom for a rifle. With this advantage, he was selected as squad leader during infantry Basic and Advanced Individual Training.

At the end of AIT, Jim had no idea where he would be assigned. It turned out to be the “spit and polish” brigade at Fort Myer, Virginia. He was awestruck when he learned that it was the unit that provided ceremonial support for Arlington National Cemetery.

After two weeks of training, he was selected to join one of the honor guard company’s three platoons: honor guard drill team, casket bearers, or firing party. He chose the drill team.

One day he saw a soldier in dress blues going to the head of the chow line.

“I didn’t even know the army had dress blues,” he said.

He learned that the soldier was a guard at the Tomb of the Unknown Soldier. He immediately decided that he had to go for that.

After practicing constantly with some of his friends who were tomb guards, he was given the opportunity. While some of those selected never made it to the tomb, Jim made it after just a couple weeks. Guards were usually first put out early or late in the day when there were few spectators at the tomb. Jim’s first call came for the noon changing of the guard, before the biggest crowd of the day.

“I got through the first change okay. But when I was standing at the end doing the 21 second count, I heard a noise. My hand was trembling so much that the bayonet was rattling.”

He managed to get through it all without screwing up.

“From that point on, I had the best duty the United States Army had to offer.”

People often ask Jim how he got to be a tomb guard. He explains that the army selects soldiers who fit a defined profile – certain height, military bearing, attitude, and such. Of course only a tiny fraction of those who fit it are selected.

“But I had another advantage,” he says. “My grandmother prayed me into it.”

That gave him not only great military duty, but also membership in a very exclusive organization: The Society of the Honor Guard – Tomb of the Unknown Soldier. Jim was instrumental in forming The Society, and has served as its president.