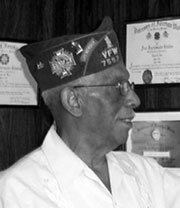 A lot of people do the strangest things trying to gain respect, but fail precisely because they are seeking it. James C. Lee has gained it in abundance because he didn’t seek it. He just spent his life doing what truly respectable men do.

That wasn’t easy for a black man growing up in the south. But he worked hard to get into college. Then, while in college, he was drafted into the United States Army. At the time, black men were assigned only to all-black units. Well, almost all-black. All officers above the rank of lieutenant were white.

Army life for a black soldier at that time was not just systematically degrading; it could be downright dangerous – right here in the United States. Lee was in the Shenango Personnel Replacement Depot awaiting overseas assignment on the night of July 11, 1943, when conflict a between white and black soldiers ended up deadly.

“I went up the street,” Lee said. “There must have been at least 15 or 25 people killed. The army says like only two or three people killed. But you could see those lying around.”

Assigned to the all-black 2nd Cavalry Division, Lee was sent to Casablanca in North Africa, where the division was dismantled to make up replacement units. Lee became Electrician Foreman in the 1334 Engineer Construction Battalion, which was responsible for furnishing electricity for military hospitals in Italy.

“Allied headquarters would allot me say 40 civilians to do the manual work and things like that,” said Lee, who was a tech sergeant by then, “and I had six NCOs with me that had electrical training.”

Lee worked with his unit all the way from Naples up to the Italian Alps. They were there when the war ended in May.

After the war, Lee returned to Farrell. Despite his outstanding qualifications and electrical experience, he found all doors closed to him because of the color of his skin. Always one to overcome adversity, he opened his own radio and television repair business which he ran successfully until his retirement.

For fifty years Lee has been a dynamic member of the Veterans of Foreign Wars. He has served as post commander, district commander, and many years as quartermaster of VFW Post 7597. The walls of his VFW office are covered with evidence of the respect Lee has earned: countless certificates and plaques honoring his service to his fellow veterans.