John Daverio has been fascinated with history since he was a kid. He can tell you how many words there are in the Treaty of Versailles, how many Russians were killed during World War II, how many tons of bombs were dropped on Japan after the two atomic bombs, and why the sun never set on the British Empire.

His interest in history was rooted in his own family and in his neighborhood.

“When I was in third grade in what is now the Musser School,” John said, “the teacher one day said, ‘We all have our own language. Here we have English, in Germany they have German, and so on. They all have just one language.’ I got up and I said, ‘In Switzerland they have three languages – Italian, German, and French.’ She said, ‘Now John, where did you ever hear that? I said, ‘From my father and mother.’”

“My mother’s three sisters settled in France. They wanted to come here, but the husbands said the United States was too violent. So they stayed there and lived through two world wars.”

When Joe Daverio came here in 1905, he worked with the Vasconi brothers, who came from the same part of Italy and worked in the same trade. Then around 1911, he decided to start his own business.

“He did very well, because the country was young and growing, and there was lots of construction. He was a member of the union for 37 years before he passed away in 1942.”

John was born in 1917, seven years after his sister Caroline and seven years before his brother Joe. John got a practical education in geopolitics from his neighborhood in Sharon, which included families from diverse ethnic backgrounds. There were German, Hungarian, Schwabian, Irish, Slovak, and Russian families. Each of them reflected the nations they came from, and mirrored the relationships among them.

After high school, John attended business school in Sharon for a year. 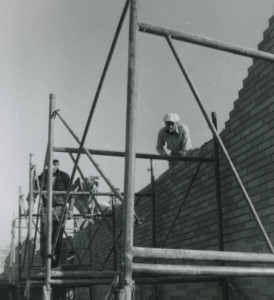 “Then some construction work started up. So my dad said it might be better for me to get my apprenticeship card. When I started I was the youngest bricklayer there. Before I retired I got my 50-year gold membership card with the Bricklayers, Masons, and Plasterers Union of Sharon. My brother Joe and Uncle Sam also got gold cards.”

Working hard didn’t dull John’s interest in learning. Nor did his military service during World War II. Late in 1944 he arrived at Tinian Island, the B-29 base from which the United States launched countless aerial assaults on Japan – including the only two nuclear attacks in history. The B-29s flew countless bombing sorties against Japan before the atomic bombs were dropped on Hiroshima and Nagasaki. Few Americans know much about those earlier missions.

“This has never been publicized too much,” John said. “We used 80% napalm. Every bomb load carried almost eight tons of fire and two five hundred pound TNT bombs to spread the fire. We bombed at least 160 cities.”

The Air Force used the B-29s to mine the waters around Japan which effectively shut down shipping between the coast of Asia and Japan.

“We had what they called Torpex bombs. They were magnetic and acoustic mines. We dropped them from Korea all the way down between Japan and the mainland of Asia. The Japanese were not getting any more gas and oil. We knew that the war could not last much longer than the month of July.”

But the Japanese refused to surrender, so on August 6 and 9, 1945, the United States dropped the atomic bombs.

When John and his brother Joe came back from the war, they resumed their father’s bricklaying business. John remained unmarried until he was 36.

“I had known Margaret Sparano at a distance when we were teenagers because my parents knew her parents. She was very brilliant and attractive. After I came home from the army I wanted to ask her for a date, but I heard she was going with a doctor in Akron. I said oh, well, that leaves a bricklayer out. Then some relation said, ‘No, I don’t think she’s going with anyone.’ So I asked her out and she said okay.”

John and Margaret dated for two years before they got married on November 24, 1953.

“I just liked everything about her,” he said. “She was just my type. She wanted to be a school teacher but her parents didn’t have money to send her to college. But she was well-read and educated herself. She played the piano. She had the same piano teacher as my sister Caroline.”

Margaret was a buyer for four departments at Sharon Store. She stayed with the store when it became May’s and then Kauffman’s.

The marriage of John and Margaret turned out to be exceptionally fortunate, a rare combination that provided the genetics and environment to produce a truly exceptional son. Born in 1954, their only child John Joseph Daverio, or Johnny Joe as they called him, started speaking when he was seven months old. He began teaching himself German at the age of six, shortly before he started reading Shakespeare.

Johnny took up the violin when he was seven, and gave his first performance with the Youngstown Symphony when he was 13 years old. He advanced rapidly beyond the abilities of local teachers. Mr. Rosenberg, his teacher at YSU, sent a tape to Carnegie Hall when they were conducting a talent search for the National Youth Symphony. John was a finalist and was awarded a four-year scholarship at Tanglewood with the Bernstein New Artists. He played in a televised broadcast at Carnegie Hall when he was 14. He was offered university scholarships to many great universities, including a National Merit Scholarship and a National Council of Teachers Award in English. He accepted one to Boston University, graduating Summa Cum Laude.

John Joseph Daverio after receiving his PhD on May 15, 1983

While he could have pursued a performance career, John chose to be a teacher. He spent his entire career at Boston University, eventually becoming head of the Musicology Department. He became world renowned for his scholarly publications as well as his performance excellence. He lectured at various universities in the United States and Europe, and could speak Italian, French, German, and Greek, and was learning Russian. He gave pre-concert lectures for the Boston Symphony, Philadelphia Orchestra, and New York Philharmonic. Two of his colleagues were Russian violinists. They were making preparations for him to perform in Leningrad.

John was known not just for his intelligence and talent, but also for his personality and his love of children. According to a Boston Globe article, “His first stop at his friends’ homes was always the floor, where he would instantly begin playing with whatever game or toy was at hand.”

His students praised him for the quality of his preparation, knowledge, and sense of humor. Students came from far away to learn from him. One blind student came from Greece specifically to study music history from him.

John often returned to Sharon to visit his parents. His last visit was in March, 2003.

“He was here visiting his mother in the hospital. He left here early in the morning of March 16. He called at 3:30 that afternoon and said he got to Boston and everything was okay, and said he would be seeing us in three weeks because he was going to give a lecture at Pitt. But that never happened.”

Security cameras at the Boston University Fine Arts building recorded John Joseph leaving the building about 9:30 that evening. Then he simply vanished. A month later his body was found in the Charles River. The cause of death was determined to be drowning, but the case was never solved.

Both John and Margaret had to battle depression. “I lost almost 40 pounds, and Margaret lost a lot of weight, too.”

Margaret passed away in February, 2006. He misses not only her, but also his brother Joe and sister Caroline. Joe had worked with him throughout his career. Caroline was a teacher in the Sharon Schools, Penn State Shenango, and Edinboro University.

Despite these losses, John has gradually recovered his ability to laugh and to share his knowledge of history with others. He has lectured about World War II at Kennedy Catholic High School, and has been invited to speak there again this September.

“I was very pleased with the kids there,” John said. “They were very attentive and asked some very good questions.”

And he continues to read and to learn. He can tell you that the treaty of Versailles contained 80,000 words, that 28 million Russians were killed during World War II, and that our B-29s dropped nearly 7,000 tons of bombs on Japan on August 14, 1945 – five days after the second atomic bomb was dropped on Nagasaki. He might also tell you that the sun never set on the British Empire because God didn’t trust them in the dark. So in spite of losing what no one should ever lose, he has kept his mind and his sense of humor.