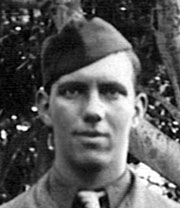 There’s a phrase that John Getway of Sharpsville, PA, never uses: “I think I’ll hang around a while.” He actually did hang around – for three days – 65 feet up in a tree in Holland during World War II. It nearly cost him his life, and only his fortitude and excellent physical conditioning enabled him to recover.

As crazy as it sounds, that means he might owe his life to milk. Not to drinking it, but to carrying it. When he was in high school, he got up very early every morning, seven days a week, and delivered milk for Brookfield Dairy (now Dean’s Dairy).

“We used to deliver milk down as far as Sharon High School. And then they would rush back to Ridge Avenue so I could jump off the truck and go into the high school. The janitor would say, ‘Hurry, John,’ and just as I got into my room he would push the button for the bell. So I was never late.”

“Right after Pearl Harbor five of us decided we would go to into the service,” John said.

He was sent to Fort Bragg, North Carolina, for basic training. That was right at the time the first U.S. Army airborne units were being organized. John decided to become a paratrooper.

The training in jump school was extremely rigorous, but John found himself well prepared for it.

“In airborne training, we would go out and walk, then run. They would stop to let the men smoke. Well, I didn’t smoke. One time I said, ‘Sergeant, can I keep double timing all the way up?’ He said ‘Sure, go ahead.’ I ran way up there and sat down on a rock. When the rest of the troops got there, they tired and sweating. The sergeant came over and asked, ‘How the heck did you do it?’ I told him I peddled milk all the time, jumping off and on the truck, summer and winter.”

John was assigned to the 509th Airborne Regiment at Fort Bragg. From there he started an incredible odyssey with one of the most elite units of the army – jumping from airplanes, fighting enemy soldiers in hand to hand combat, wandering in the desert, and even witnessing the eruption of Mount Vesuvius.

It started in mid-1942 when the 509th departed Fort Bragg to go to England. They trained in Scotland, jumping from British bombers because the American planes hadn’t arrived yet. They were the only paratroopers to jump from only 250 feet, which allows barely enough time for the chute to open.

In November, 1942, the 509th spearheaded the invasion of North Africa.They flew over 1600 miles from England to conduct a parachute assault on Tafraoui Airport in Algeria. A week later they made their second combat jump on the airfield at Youks-Les-Bains near the Tunisian border. During subsequent combat operations, John was wounded in the hand while trying to fend off an enemy soldier’s bayonet.

“All we did was put sulfa drugs on it, and they gave me a tetanus shot. It was four days before they could get me to a hospital to check me out.”

From December 1942 to June 1943, the 509th trained for the invasion of Sicily. John’s company was attached to the 504th Parachute Battalion, part of the 82nd Airborne Division. On July 11, 1943, they took off to for a combat drop onto the beachhead in Sicily.

During that jump John got wounded several times. Again, it was sulfa drugs, tetanus shot, and keep on fighting. In five days the division pushed forward 150 miles and captured 23,000 prisoners.

After fighting through Sicily, the division landed in Italy and fought northward through Naples. On March 18, 1944, John’s unit was bivouacked about a mile from Mount Vesuvius when it erupted.

“They moved us 20 miles away, but you could still see the smoke,” John said.

Shortly after that the 82nd moved back to England to prepare for the invasion of northern Europe. In September, 1944, they made a combat jump into Holland.

“We jumped at night time, and I landed way up in a tree. I hung there for three days and three nights. My canteen and K-rations were on my back, and I couldn’t reach them. Two little boys saw me. They went back and got their family. When they lowered me down, my legs crumbled because I had no circulation in them for three days.”

John was sent to a hospital in England, then to one in Miami. The physical therapy was difficult, but John persisted. He was there for a year and a half recovering from his ordeal. Part of his therapy involved climbing a rope hand over hand. John could do little at first, but he persisted until he could climb all the way to the high ceiling.

When John came back to Sharpsville, he got a job at Steel Fabricators. After a few years he got laid off, but quickly got a job at Sawhill Tube .

John married Ann Gray on May 28, 1955. While raising their family, Ann worked at Sharon Stationery for 20 years, and John worked at Sawhill for 30 years until he retired in 1985.

For many years John and Ann were active in the General Ridgway Chapter of the 82nd Airborne Division Association, in Dayton, Ohio. They went there two or three times a year for various events. They attended as many of the association’s annual conventions as possible, and helped put on three of them.

Since 1986, they have gone to Fort Bragg for the annual 82nd Airborne Division’s annual review. The most memorable moment for John and Ann came in 2002 at the celebration of the 60th anniversary of the airborne. One World War II veteran was selected from each 82nd Airborne unit that fought in that war. John was chosen to represent the 504th. He rode in the review with the veterans, then stood beside the commanding general on the podium as the Division marched by.

Some of the effects of John’s World War II ordeal persist to this day. He freely expresses his appreciation for the one who took good care of him for so many years, until she passed away on March 6, 2012.

“Some women would turn their back on you and walk away” he said. “But anything that happens to me, Ann knew what to do and got everything done. She was just as good as a nurse.”