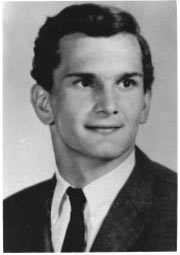 Nine months after graduating from Greenville High School in 1969, John Lopochonsky was drafted into the army. After training to be a helicopter door gunner, he headed to Vietnam in October, 1970 to serve with A Troop, 7th Squadron, 1st Cavalry.
He was assigned as a gunner on an OH-6A “Cayuse” helicopter. That put awesome power at his fingertips, probably 7.62 mm six-barrel minigun, a Gatling-type weapon that could fire at the rate of more than 2000 rounds per minute.

But to use that power, a gunner had to be both crazy and courageous. When teamed on a combat mission with a Cobra gunship, the Cayuse’s mission was to fly in low over suspected enemy positions to draw out their fire so the crew could mark their positions. Then the Cobra would come in with greater firepower and destroy them.

In other words, the Cayuse helicopters were sometimes used like moving ducks in a carnival shooting gallery. But unlike those ducks which flop over when hit with a b-b, the Cayuse could take a lot of serious hits and still take its crew home safely. One of them accumulated 1,340 combat hours, was shot down four times, and had two non-combat accidents. It was repaired every time, and in the end returned to the United States where it performed well for the New York National Guard.

Sgt. Lopochonsky wasn’t so fortunate. During his last mission, the Cayuse he was in crashed after taking too many hits. Before it crashed, however, Sgt. Lopochonsky proved that his core characteristic was ultimate courage. His Bronze Star citation, awarded posthumously, states that “he distinguished himself by exceptionally valorous actions, Volunteering for recon after the scout team came under intensive fire. . . . On a run over a heavily fortified enemy bunker, Lopochonsky completely exposed himself to enemy fire as he destroyed 5 buildings, one bunker, and four sampans.”

Sgt. Lopochonsky was survived by his brother James, and his grandmother, Mildred Artman.

He was the 37th Mercer County serviceman to die in the Vietnam War.