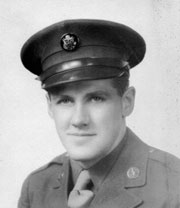 It may be unorthodox, but John Krofcheck is proud to be called an “S.O.B.” He was with the 100th Infantry Division in France when they captured the heavily fortified Fortress de Bitche on March 16, 1945, after a bitter three-month siege. From that, the division got the nickname “Sons of Bitche.”

That was just part of John’s unorthodox military career. When the 17-year-old enlisted in December, 1942, he became a military policeman in Washington, DC. His most dangerous assignment was directing traffic at the entrance to Arlington National Cemetery. But he wanted to get into the action, so he volunteered for the infantry.

He definitely got his wish for action. With the 100th Division during an intense battle in the Vosges Mountains, his company commander called him forward.

“I was loaded down with the BAR and ammunition, running forward like a dog,” John said. “I’m not ashamed to admit that I was scared.”

He turned to see if his assistant gunner was behind him. He fell into a large shell crater, severely injuring his leg. But he faced his fear and continued on without going to the medics.

John witnessed both the worst and the best that men do under fire. His assistant gunner shot himself in the leg to get out of combat. And John saw Lt. Edward Silk single-handedly assault a German unit that had the Americans pinned down with machine gun fire. According to his Medal of Honor citation, Lt. Silk ran across an open field through intense machine gun fire, took out the gunners by lobbing grenades into an open window, then attacked a second building. When he ran out of grenades, he started throwing rocks. Twelve Germans surrendered to him.

John adds a detail that the citation omits. Lt. Silk’s courage may have been enhanced by some of the contents of his two canteens full of cognac.

In December, 1945, John got out of the army, but that was 18 years before the end of his military career. In 1946, he re-enlisted with the Military Police. He got out again on a hardship discharge in 1948. He helped establish a National Guard unit in Sharon and became its First Sergeant. When the Korean War started, he volunteered for reactivation and went to Korea, where his unit provided security for a quartermaster installation in Ascom City.

After Korea, John served in Fort Leavenworth, Kansas until he retired in 1963.