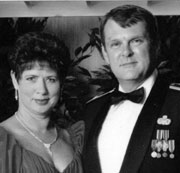 The Air Force Reserves hold competitions every year during each unit’s two-week summer active duty training. One year the Security Police Squadron at the Air Reserve Station in Vienna, Ohio, was rated as the very best in the whole Air Force Reserve system. The commander of that unit was Major John Lechner.
That wasn’t the only unit to excel under John’s leadership. When promoted to Lt. Col., he became commander of Vienna’s Aerial Port Squadron, which handles air cargo. Before John took command, it had won the honor of being the best Aerial Port Squadron in the Air Force Reserves. With John as its leader, it won the competition a second time.

Being the very best has its consequences. On 2 August 1990, the United States responded to Iraq’s invasion of Kuwait with Operation Desert Shield.

“I figured we’d be among the first units to be activated,” John said. “We were the second Aerial Port Squadron called up. The first one was from President Bush’s home state of Texas.”

John’s squadron was activated the week after Thanksgiving, 1990. At that time, he was a Pennsylvania State Police officer.

“I had to go in to work and quickly wrap up my whole life,” he said.

They were sent to Ramstein Air Base in Germany, where they were integrated into Aerial Port Squadron. The combined unit continued to demonstrate excellence in its mission to ship men and materiel to the combat zone.

“Everything has to be weighed, then carefully loaded so each plane would be balanced,” John said.

That’s quite a task, especially given the variety and volume of the shipments. They shipped troops, Apache helicopters, Patriot Missiles, weapons, and other materiel. On Christmas Day, 1990, they unloaded and loaded 55 planes within 24 hours.

When John returned in 1991, he continued serving in both the Air Force Reserves and the Pennsylvania State Police. When he retired from the reserves in October, 1997, he could look back on a uniquely varied career: ROTC at Gannon College, commissioned in the army Military Police Corps, two years on active duty, four years in the inactive army reserves, several active army reserve assignments, and finally twelve years in the Air Force Reserves. His State Police career was equally rewarding, with ultimate promotion to the rank of Lieutenant.

“A lot of what I learned in the military about leadership and command served me very well in the state police,” he said.