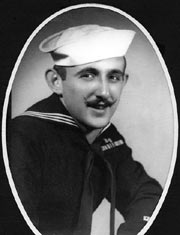 Like many other young men during World War II, John Leyde left for military service in 1943 before his Sharon High School graduation ceremony. It took two years for his diploma to catch up with him through the military postal system.

The image of John guarding the coast satisfied his mother. But it didn’t take long for John to discover that Coast Guard ships didn’t necessarily float around near the shores of the United States.

After basic training, John was assigned to the USS Peterson. This wasn’t a little 65-foot Coast Guard cutter. It was a newly-commissioned destroyer escort.

“It had made just one trip in the Mediterranean prior to my going on.” John said. “They lost a ship with tremendous loss of life. Then they came back to the States. That’s when I went aboard. We went out for a day or two on a shakedown cruise off the coast of Long Island and then went back in to New York.”

The Peterson spent the next two years on convoy duty on the Atlantic Ocean between New York and  the British Isles.

“We escorted tankers, and sometimes they would put a troop ship in the middle of all these tankers – maybe 40 to 50 of them. And there were six destroyer escort ships that looked for submarines.”

It was adventurous from the very beginning. After its shakedown cruise, The Peterson was assigned to accompany a newly-formed convoy.

“When they brought the convoy out,” John said, “we patrolled out into the ocean. In bringing these big ships together to form the convoy, two of them collided. One of them was damaged. We were designated to escort that disabled ship back into the harbor.”

A German submarine apparently had been sitting out off the coast for days. It put a torpedo into one of the ships and damaged it pretty bad.

“While we escorted it back, our ships were running all over the ocean looking for this German sub. On our way back out, we ran right over top of it with our sound gear. That just let everything go helter-skelter. Our ship and another ship went on each side of this submarine and dropped depth charges. When they brought it to the surface, we started shooting and he started shooting. The sub put a cannon blast through our smokestack.”

The Germans were able to use a machine gun from the conning tower, but not the gun on the forward part of the sub.

The Peterson didn’t pick up any survivors, but a sister ship did. The submarine captain had been told that it would be easy because the Germans had done such a good job that we didn’t have any ships left.

“He couldn’t believe it when he saw 40 or 50 big ships coming out of the harbor. It was right off the coast of New Jersey. He got a free ride to England and was put in prison camp there.”

The Pete made eight round trips between New York, England, and France. Each took about six weeks. When the war was over in Europe, the Peterson was transferred to the Pacific because the war there was continuing.

“We were tied up in Hawaii just waiting for orders when VJ Day was declared,” John said. “But they still sent us to Japan. There we escorted landing craft which went about six knots. Then we headed back home to be discharged. We had a lot of ammo on board – depth charges and everything else. We were going into Hawaii, and got word to get rid of all our ammunition. So we shot off everything we had. When we got to Hawaii, they loaded us all up again with ammo. Then we headed for California. A day or two out, we got the word again: no ammunition. So the captain, being a pretty good guy, said throw it over the side. We don’t want to have to clean these guns again. We went to Florida and decommissioned the ship in the St. John’s River.”

After the war he took a train to Philadelphia where he was discharged from the Coast Guard.

“I came home and went to work with my father and older brother in the family’s auto parts business. And that was where I worked my whole life.”

John  was very active in the community. He served on the school board for 20 years; volunteered for the Community Chest; was a trustee, member of the stewardship committee, and Sunday School teacher at his church; and became the first man to be named Volunteer of the Year at Sharon Regional.