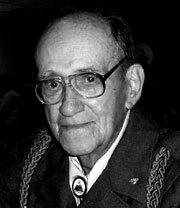 After landing on Omaha Beach on August 9, 1944, a month and two days after D-Day, John advanced with the Seventh Armored Division all the way across France – fighting the Germans, building bridges, blowing things up, rescuing other military units, and liberating French cities.

By December, 1944, the American and Allied armies had reached the German border. It looked as if the war was almost over. Then Hitler launched a surprise attack with virtually all of his remaining forces and pushed the line back 70 miles. The Seventh Armored Division was thrown into this “Battle of the Bulge” as reinforcements.

John remembered it vividly: “The Germans sent at us two divisions of 16 to 18 year old kids out of high school,” he said. “They didn’t have any idea what war was, and had no training. They gave them those little burp guns. They thought they were cowboys.”

The Germans weren’t the only enemy. With limited transportation available, the American generals opted to give priority to shipment of ammunition and fuel rather than clothing. The weather turned bitterly cold, with wind chills around 30 degrees below zero. Stuck in summer uniforms, many of the troops – including John – suffered severe frostbite.

Meredith kept different kinds of souvenirs from his World War II combat days until his death in December, 2003. Some were extremely painful, such as the German bullet that could not be removed from his leg. And the extremely painful aftereffects of the severe frostbite plagued him until the day he died.

Other memories more than made up for the pain and suffering, such as the medals he received for his actions. He was also proud of the letters of appreciation sent to the Seventh Armored by the French cities they liberated.

Those letters painted vivid, positive pictures of the army’s swift and efficient advance. The mayor of Verdun wrote, “We shall never forget that in less than one hour you delivered us of our burden, and the rapidity of your advance has avoided the destruction of half of our village by these unchained brutes.”

The French people were also struck with the contrast between those “unchained brutes” and the American soldiers. The mayor of Chateau-Thierry wrote, “All have been struck by the simplicity and the amiability and the cordiality of your officers and men.”

Even after hard-fought battles, the true character of the American soldier still showed through.