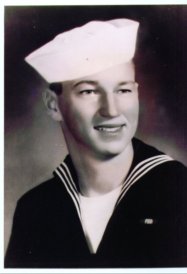 For Marines in Vietnam, as in most war zones, “Doc” was a Navy medical corpsman, because the Marine Corps had no medics of its own. “Doc” accompanied the Marines into the teeth of the battle, because when a Marine went down, “Doc” had to be right there to help him. With his focus on attending to others rather than on defending himself, the medical corpsman was particularly vulnerable.

Hospitalman Joseph A. Baker was serving with 2nd Battalion, 4th Marines, 3rd Marine Division in the province of Quang Tri, just south of the border between North and South Vietnam. His letters home contain vivid pictures of both the courage, vulnerability, and dedication of the Navy corpsmen. “”My platoon saw action today. I wasn’t with them but I had to help with casualties back here at camp. We had two dead and about twelve wounded. I’m not worried anymore about if I will know what to do. When they started bringing them in I just went to work without even thinking.”

Of course, he did often accompany his unit into the field: “We were hit on patrol yesterday and we lost one man and had two other wounded in action.”

Joe had his own close calls: “A corpsman from the 1st platoon was hit and I had to go to his wounded. He had three of them about 75 meters across an open rice paddy and I had to go get them. Our sentry opened up to give me cover and I started across running low. Then I began hearing rounds go over my head and saw them kicking up sand at me feet. I put it in high gear and really began moving. I had to check myself when I got there to make sure I wasn’t hit. A grenade launcher came over after me, then I got scared seeing what I had crossed through.”

In the gallows humor of combat soldiers, such escapes did not go unnoticed: “Most of the corpsmen out here have Purple Hearts already and they are kidding me because I don’t. They can’t understand it.I’ve been in more fire fights and sat through more mortar attacks than they have.”

Unfortunately, Joe’s good fortune ended on March 7, 1968, when he was killed by small arms fire.

Joseph was the fifteenth serviceman from Mercer County, PA, killed in action in Vietnam.