The first dog to enter our training program is a four year old male beagle/lab mix named King. His owners, a retired WWII veteran and his wife, had adopted him into their home after finding him abandoned on a country road. When they had to move from their house into a condo, they put a flyer in a local pet store advertising him as a “free dog to a good home.” That’s where we discovered him. His owner was so proud to give him to us so that he could help another veteran.

King is a mild mannered, very social dog. He loves other dogs, kids, and basically everyone he meets. He enjoys daily walks, fetching his toys, and spending time with his foster family.

On September 3, King passed his American Kennel Club Good Canine Citizen test. He is tentatively set to be adopted by an Iraq War veteran and his family. 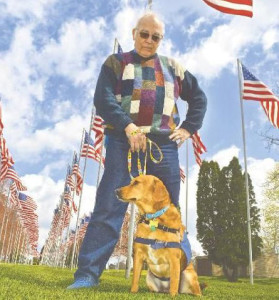 King with his foster trainer, Joe Zentis, on the Avenue of 444 Flags 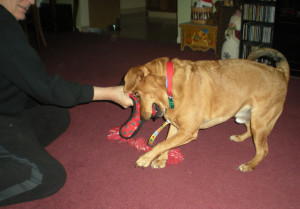 A friendly session of tug-of-war