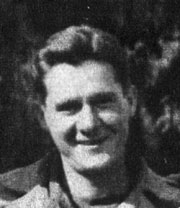 When Leonard Pleban went into the army in October, 1942, he was assigned to the medical detachment of the 908th Field Artillery.

“I couldn’t even stand the sight of blood,” he said. “I puked a few times, and passed out a few times when I saw some of the surgeries, but after that it was nothing.”

During a training course at a hospital, a chiropodist told him about chiropody, which is the old term for podiatry. He didn’t realize at the time that he had discovered his future career.

The 908th Artillery was sent to France shortly after D-Day as part of the 83rd Infantry Division. The unit fought through five major campaigns, including the Battle of the Bulge. Leonard was one of the very few in his unit to emerge without a scratch.

Then he remembered chiropody, and realized that chiropodists (podiatrists) don’t have to do that.

So the army gave him his vocation. It also gave him an avocation. After the war, Staff Sergeant Pleban was assigned to help set up a nightclub to entertain troops while they waited to be demobilized. He served as MC and half a comedy team in the style of Abbott and Costello.

When he came back from the service, he took pre-med courses at Youngstown State, then enrolled in the Ohio College of Podiatric Medicine in Cleveland.

After completing his schooling, Dr. Pleban found that starting a practice wasn’t easy. He found space for an office in downtown Sharon, above the Sharon Restaurant. With 36 steps up and no elevator, it wasn’t ideal for a foot doctor. It wasn’t even an office, just a large room. Getting set up put him deeply in debt.

Then he had an office and equipment, but no patients. His clientele built up slowly until one key element fell into place. He volunteered to work with the Sharon High School athletic program. He did that pro bono for 50 years.

“ The school got a doctor without cost,” he said, “and I got the kids, their parents, and their grandparents as patients.” He took advantage of invitations to host sports banquets and other events. His sense of humor, initially honed in his military nightclub, made him a roaring success as the Valley’s MC.

“He’s known as the Johnny Carson of the Shenango Valley,” says his wife Florence.