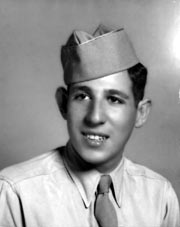 For sheer variety – and for the military importance of his mission – few World War II veterans can match the experiences of Louis Epstein of Sharon. While in the army, he attended college, trained with the army engineers to build and blow up bridges, and ended up fighting the Japanese not with explosives, but with radio receivers and a typewriter. He spent much of the last two years of the war behind enemy lines – without ever leaving the United States.

He was 18 years old when he joined the army right after graduating from Sharon High School in 1943. The very day he passed his physical, the army sent him not to a basic training camp, but to Carnegie Tech in Pittsburgh.

“It was a kind of college program to train you to go into specialties in the army,” Epstein said. “It was short-lived. I went for one or two terms. We studied engineering, physics, chemistry, that sort of thing.”

While there, Epstein had a fascinating experience.

“We were living in an old foundry on 4th street – there were about 200 of us. We were in double-decker bunks, army style, and we were having one of these bull sessions one night. Somebody raised the question as to whether you can convert matter into energy or vice verse. One of the boys yelled out, “Let’s write to Einstein.” So I was elected to write a letter to him. So I wrote a letter to Albert Einstein, Institute of Advanced Study, Princeton, NJ, never really expecting to get an answer.”

A couple of weeks later he received a letter, obviously typed by Einstein himself: “Dear Mr. Epstein, Yes, it is possible to convert matter to energy under the following conditions – e=mc2. Cordially, Albert Einstein.”

“The whole thing was an amazing experience,” Epstein said. “Imagine how we felt in 1945 when the bombs went off, and then this all sort of came into place.”

When the college program was terminated, the students were shipped to an induction station in Harrisburg.

“They put us in the real army with uniforms and the whole bit and began to assign us to various branches. I was shipped to the Corps of Engineers at Fort Belvoir, VA.”

The training there included building and blowing up bridges, laying and clearing mine fields – and a battery of tests to determine the best placement of the recruits.

“One tested your ability to recognize rhythm sequences, which is basically related to musical ability. I had done a lot of music, played clarinet and piano, and I rated almost a perfect score. That indicated to the army that I should get into telegraphy and Morse Code kind of work. So they sent me to a Corps of Engineers telegraphy school and I became a high-speed radio telegrapher.”

From there Epstein was assigned to Fort Lewis, Washington, where he transferred to the 115th Signal Radio Intelligence Company. Their mission was to intercept Japanese army traffic in the Far East.

With a double set of Hammarlund Super Pro receivers hooked up to 120-ft. rhombic antennas, Epstein would listen to both sides of a radio-telegraphed conversation between two Japanese army officers and type it onto a roll of paper.

“We couldn’t stop as long as they were still sending. Guys would come by and pull the papers out of our typewriters and immediately start teletyping the information to Washington.”

The messages were in two parts – what Epstein called chit-chat, and the actual encoded communication.

We were taught the lingo of basic Japanese chit-chat – how are you, are you ready to start copying, I’ll talk to you tomorrow at 9 o’clock, all that stuff even though it was in Japanese and telegraphy.”

The encoded part was sent in groupings of four numbers. Epstein had no idea what that part meant – but others in the army intelligence operation were able to interpret it quickly.

“It was sent in an almost infantile kind of code – nothing like the Germans, which was complicated to break. It was a code based on things that you looked up in an encyclopedia. If you had the encyclopedia you could break the code. For some reason the Japanese did not realize that an American naval officer before the war had run off with a set of these encyclopedias. So as soon as we got the stuff down on paper, it was decoded rapidly and easily and translated, and we used to joke that we had the results of those messages before the Japanese did on the other side.”

“We had experts in our same building who analyzed the volume of traffic coming from the different points, and based on that, helped to reach conclusions about where something might happen.”

They could also precisely locate the source of Japanese radio transmissions.

“We had a station in the Aleutians just like ours in Fort Lewis, and the third was down in Petaluma, California. If someone heard a little beep somewhere out in the Pacific, we immediately triangulated it and we knew exactly where it was.”

Epstein is justifiably proud of his military service.

“I’m nothing but amazed at how well this signal outfit did, and what it accomplished. It wasn’t heavy duty combat or all that, but it was an extremely interesting piece of work that was mentally challenging, and I think we made a lot of contribution to the war effort.”