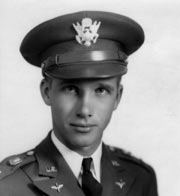 Born on August 30, 1918, Jimmy Blose was driven by a restless spirit. He wrote later, “I may have been a much better man had I stayed in Sharpsville, but I know that I never could have been content living there. Something was missing there; I don’t know just what it was.”

Before he reached his 24th birthday, that restless spirit drove Jimmy to a place half the world away, where he vanished for nearly 65 years.

While he was still in high school, Jimmy developed the passionate desire to fly.  He left Sharpsville in 1938 to study Aeronautical Engineering at the University of Michigan. While there, he took lessons to get his civilian pilot license.

But that was a bit too calm for him. He enlisted in the Army Air Corps in February, 1941. Through most of that year, he trained at airfields in Oklahoma and Texas. His niece, Susan Blose Crowley of Hermitage, has the letters he wrote home from there.

“By reading those letters,” she said, “I feel like I know him, even though he died before I was born.”

On February 13, 1941, the day he arrived at his first base, Hatbox Field in Muskogee, Oklahoma, he wrote that the cadets got off to a quick start: “Got out to the field about 9:00 and have been on the go ever since. Drill, supplies, exams, orders and everything else. . . I don’t know what to do with all the clothes that I brought. We are given all that we need here and can’t leave the field except Sat. night.”

After three weeks there, he wrote about the stress of the training.

“Our planes cost over $14,000 apiece and they don’t want them cracked up. It costs the government over $100 a day to train us. That is why they are so strict and wash out so many. About three upperclassmen leave every day. They want only those who can fly and fly well.”

Lt. Blose was a sensitive young man. “I noticed buds coming out on some trees yesterday and the farmers were plowing,” he wrote. But he learned that gazing at the scenery could be hazardous. “One fellow waved at us when we were practicing forced landings. Both the instructor and I waved to him at the same time and the plane almost got out of control. I got the devil for it afterwards. We were only about 2-3 feet off the ground when he regained control and started to climb.”

The young aviator learned to deal creatively with unexpected situations.

“I have done some acrobatic flying this past week,” he wrote on June 16, 1941. “I did a slow roll on Friday, got over on my back and couldn’t roll on over so I dove it out and picked up 210 mph in the dive. That is the fastest I have ever traveled and Dad complains about driving over sixty in the car.”

Six months later, he was flying a Bell Airacobra P-39D fighter that could attain more than 350 mph in level flight.

He was confident that flying was safe. “Our commanding officer said that while we are in training, more cadets would be killed in automobile accidents than in plane accidents. Since I have been in Texas, three cadets have been killed in automobile accidents and only two in a plane. So you see, flying isn’t dangerous. It is true that a plane will fly itself but a car won’t drive itself.”

On September 8, Lt. Blose revealed another development in his life: “I have been dating a girl by the name of Catherine Zahn. I met her parents last night and her mother is very nice.” Three months later, after receiving his wings, he wrote: “The original pair that the Gov’t gives us are as much as an engagement ring or a fraternity pin. Catherine has mine.”

Lt. Blose was aware of his responsibilities as a member of the armed forces: ‘Think of everybody in the U.S. We are doing a big job for them. I like to think that I am making Catherine’s (and many more like her) future happiness a little more secure, maybe not with me but at least with someone. You should feel proud that I have been asked to carry much more responsibility than the average young man. I don’t know what we are going to get into over there, but I
want to go.”

He was also proud of his accomplishments: “Yes, I certainly have traveled in the last year and ten years experience have been crowded into one. The past year has been a big one for me, and I wouldn’t trade it for anything. If you stop to think of it, my progress has been amazing. I am in a position to demand respect anywhere in the world and that is a lot.”

Lt. Blose was assigned to the newly formed 70th Pursuit Squadron. On December 5, 1941, they boarded ships to sail to the Philippines. On December 7, they were ordered back to California because of the Japanese attack on Pearl Harbor. They were deployed to the Fiji Islands on January 12, 1942.

On April 22, Lt. Blose and another pilot, Lt. William Shaw, were scrambled from Nausori Airdrome on Viti Levu, Fiji’s largest island, to intercept reported Japanese fighters. But bad weather closed in, and they were instructed to land at Nandi Airdrome, 85 miles west of Nausori. The two fighters lost contact with one another. Lt. Shaw landed safely, but Lt. Blose never arrived. Lt. Shaw said that the two aircraft had flown down through a small valley several miles inland, and were forced to make sharp turns and climb steeply to try to clear the mountains.

During the next week, searches for the aircraft in the air and on the ground proved futile. The searchers said that the vegetation was so thick that they couldn’t have seen the aircraft even if they had been within 25 yards of it.

Lt. Blose was declared Missing in Action. Further investigation during and after the war failed to turn up any further information. The Blose family was left with nothing but a faint hope.

Occasionally tiny sparks would appear to keep that hope aflame. Shortly after Lt. Blose was declared missing, they received a letter from Babe Cominole, one of his good friends: “I’m sorry to hear about the telegram from Washington concerning Jim, but frankly I wouldn’t let it worry me too much if I were you. Apparently military sources themselves are not positive about his status. It may be quite a while before they can find out just where he is. I almost know he is okay and still flying somewhere or another.”

In 1947, a letter from a contractor in Fiji might have rekindled the smoldering hope. “Local people of European & mixed origin have entered the brush,” he wrote, “lost their direction and have survived for years before finding a highway or a native village. Invariably, they suffered from loneliness only, as there are no serious tropical diseases here, no poisonous animals, and food is plentiful. There is only a hope, and unfortunately a slight one, that your son will someday walk out of the bush unharmed and well. There is another slight chance that someday the plane will be
found.”

His second prediction turned out to be the correct one – but not for many years. In 2004, a couple of Fijian pig hunters reported that they had found fragments of a plane that looked like it dated from World War II. During a preliminary search of the site, Col. Patrick Reardon from the U.S. Embassy found the data plate from
the plane, as well as the name of Lt. Blose near the cockpit. As was traditional with World War II flyers, the tail of the plane was personalized. On it was name “Kitty,” with a painting of a cat.
There were also human remains of the pilot. Col. Reardon secured the site for later investigation.

In 2006, the Joint POW/MIA Accounting Command conducted a thorough archaeological/forensic excavation of the site. They discovered personal effects of the pilot, including a Sharpsville class ring. All the evidence pointed to the identity of Lt. James Blose, but they would not release the name until they were 100% certain.

A year later, Department of the Army Mortuary Officer Johnny Johnson called Mrs. Crowley to begin arrangements for Lt. Blose’s funeral. On August 22, he brought her the full report of the army’s investigation. She was very pleased with the thoroughness of the report and with the army’s handling of the whole affair.