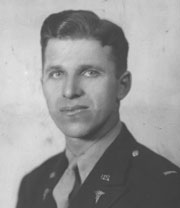 “However my country wants me to serve, that’s how I’ll serve.”

That was the response of Farrell native and current Greenville resident Michael Kolesar to every assignment he received in World War II – including ones for which he had neither experience nor inclination.

After joining the army on March 20, 1942, at the age of 26, he was assigned to the training section of the 2nd Convalescent Hospital at Camp Langdon, in New Hampshire. There he became detachment clerk and helped with the training. Because of his excellent job performance, he was selected for assignment with General Eisenhower’s First Army Headquarters in Shrivenham, England, where a Medical Field Service School was being established. But as sometimes happens in the army, his initial assignment didn’t make much sense.

“I was a medic, and I found out I was limited service because I had a punctured ear drum,” Kolesar said. “But I was assigned to the weapons section. I had never fired a gun in my life.”

Rather than complain, Kolesar learned about the weapons by reading manuals. His initiative, as well as his attitude and clerical experience, earned him a job as the section’s clerk, then a spot in Officer Candidate School.

When he was commissioned a second lieutenant on April 14, 1943, Kolesar trained doctors and nurses right there at the Medical Field Service School in courses such as field sanitation and chemical warfare.

After the D-Day invasions, Kolesar was sent to France.

“When I crossed the channel, there was a new group of soldiers,” Kolesar said. “At least I had lived a little bit, for me it wouldn’t be so bad. But hey were only kids, just out of high school.”

After the war Kolesar used the GI Bill to attend Thiel College. He finished in three years and got a job teaching Social Studies, American Government, and Problems of Democracy in the Greenville schools.

“I say with great pride that I was a professional teacher. I got my Master’s Degree in 1951, and earned the equivalence of two other Master’s Degrees, so I had enough for a doctor’s degree.”

Throughout his teaching career, he displayed the same dynamic attitude he had as a soldier and military officer – a willingness to serve others in whatever way he could.