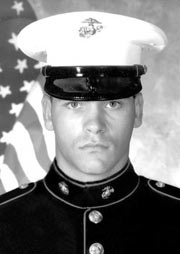 Michael Marzano didn’t always want to be a Marine.

“I believe he was about two years old when he decided,” said his father, Marine Sgt. Al Marzano, who served from 1969 to 1972, including a tour in Vietnam. His desire to serve grew with him as he got older. Al remembers Michael loving to dress up in his Marine uniform.

In Sharon (PA) High School, Michael developed into an ideal candidate for the Marine Corps. He competed in wrestling and became a very good boxer. Unfortunately, during a wrestling match, he tore a ligament in his knee. When he tried to enlist in the Marine Corps after graduation, he was rejected.

But Michael wasn’t one to give up easily. Corrective surgery on his knee and rehab straightened out that problem. He continued boxing, even flirting with the idea of turning pro. But his dream of being a Marine still dominated. When he tried to enlist again in 1969, he was accepted.

After training at Paris Island, Michael was assigned to Camp Lejeune. He was deployed twice to Okinawa for mountain training. While carrying a mortar tube up a hill, he lost his footing and tumbled down. He was knocked out and suffered a back injury.

“He called me up,” Al said. “He was very upset because his sergeant major told him he couldn’t be deployed because of his injury.”

Upon completing his four-year enlistment, Michael got out of the Corps and started taking college classes in in Phoenix, Arizona. But the Marine Corps was still in his blood, so he joined the a Marine reserve unit. Still, he wasn’t happy because the unit was not scheduled for deployment. On a visit back to Pennsylvania in December, 2004, he transferred to the 3rd Battalion 35th Marines in Brookpark, Ohio, which was going to Iraq.

The unit arrived there in March, 2005. On April Fool’s day, he achieved a lifelong goal by being promoted to sergeant, following in the footsteps of his father.

Toward the end of April, Michael’s unit was in Haditha, a small city about 150 miles from Baghdad. Insurgents had severely damaged the hospital. On May 7 they still occupied it. As Michael’s Mobile Assault Platoon was fighting to dislodge them, a van loaded with explosives exploded, killing Michael and three other soldiers.

For his service and his sacrifice, the VA Clinic in Hermitage, PA, was named in his honor.