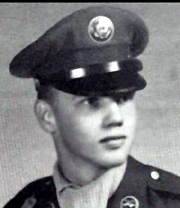 According to friends who knew Paul McKnight in school, he was a quiet young man. His parents, John and Martha McKnight, once owned a farm that was east of Clarksville, PA, on land that is now under Shenango Lake. His older sister, Elaine, born with spinal bifida, passed away in her 20s.

When he graduated from Reynolds High School in 1965, Paul followed a military tradition in his family. Three of his uncles served in World War II – Paul and Robert Yarian, and Eugene Leiphiemer. Two cousins, Dale Jackson Miller and Harold E. Miller, served in Korea.

Paul enlisted in the Army on April 24, 1966. In January, 1967, he left for his first tour in Vietnam. He was wounded twice in March, 1967, before he returned to the states, for which he was awarded two Purple Hearts.

After a year at Fort Knox, Kentucky, he could have avoided going back to Vietnam because he was the only surviving child. Nevertheless, he chose to go. He was assigned to D Company, 2nd Battalion, 5th Cavalry, 1st Cavalry Division which was conducting intense operations in Tay Ninh Province.

During the summer of 1969, the 1st Cav must also have conducted operations in Binh Long to the northeast of Tay Ninh. It was there that Sgt McKnight was killed. For his actions, he was posthumously awarded the Bronze Star with “V” device for valor. Here is an excerpt from his citation for that award:

“On a combat mission in Binh Long, he and the members of his squad came under heavy automatic weapons fire from an unknown hostile force in a night ambush site while trying to retrieve abandoned equipment. Sgt. McKnight returned the fire and directed his fire team during the fight. In the exchange he was killed.”

The medals were presented for heroism in action in the Republic of Vietnam for action on July 31, 1969

His Presbyterian Church in Fredonia, Pennsylvania, honored him by dedicating its Carillon to him.