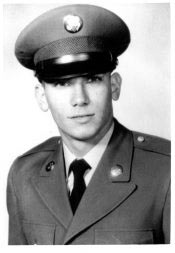 On the evening of December 8, 1967, soldiers of the 1st Battalion 2nd Infantry were complaining that their air mattresses were full of holes from enemy mortar fire. Maybe they were seriously upset, but more likely it was their way of dissipating the stress caused by a rough day.

They were positioned in Phuoc Long Province, not far from the Cambodian border. The day before, one of their recon patrols had encountered the point element of a North Vietnamese army unit. The fight lasted only a short time, with no American casualties. That successful recon alerted the Americans to the presence of the large NVA force.

At 0200 the following morning, Specialist Paul Dufford from West Middlesex was manning a listening post with two other men in front of the battalion’s night defensive position. Detecting movement in the area, he radioed the battalion commander to warn of an impending attack. Their position was quickly surrounded by a large force. In spite of the danger, Specialist Dufford remained at his post so he could advise the commander on the size and movement of the enemy.

With the battalion being hit by heavy mortar fire, the three men were ordered to return to the perimeter, but their position was overrun before they could do so. An enemy grenade wounded all three men. Specialist Dufford killed the grenade thrower, who was only a few feet away. Ignoring the relentless enemy fire, he started to help his wounded comrades back to the perimeter. As the enemy closed in, he provided suppressing fire that allowed his comrades to reach safety.

He himself didn’t make it. He was killed my an enemy mortar round.

That day, the American forces repelled the massive assault with only four dead and a number wounded. The two battalions of the two 273rd NVA regiment that conducted the attack suffered massive casualties.

Had it not been for the bravery of Specialist Paul Dufford, the outcome might have been very different. For his heroism that night, he was awarded the Silver Star.

Paul was the son of Mr. and Mrs. Charles Dufford of West Middlesex, PA. The Hickory High School graduate was decorated not only with the Silver Star, but also with a Bronze Star, Purple Heart, Combat Infantry Badge, and Vietnam Service medals.