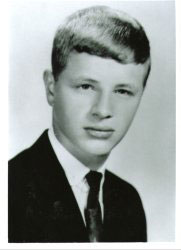 PFC Paul Good was drafted into the army after graduating from Sharpsville High School in 1965. When he arrived in Vietnam on May 9, 1967, he was assigned to Company A, 4th Battalion, 47th Infantry, 9th Infantry Division.

The Ninth Division was part of the Mobile Riverine Force (MRF), a joint force combining Navy and Army units to operate in the unique environment of the Mekong Delta.

There, conventional military maneuvers couldn’t be used because many stream, rivers, and canals severely restricted ground movement. The solution was to use helicopters and converted Navy vessels to insert army troops into areas where they were needed and to provide firepower in support of their operations. Because of the novelty of the situation, both equipment and tactics had to be invented.

As one member of the MRF wrote, “The Navy did the most in terms of development of equipment and how to use it. The Army did the same old stuff, only wetter. We went to war in boats and then got out and walked, waded, wallowed, swam, crawled, or ran until we were picked up again.”

The ships ranged in size from large troop ships, each of which provided living space for more than 800 troops, to armored troop carriers, modified LSTs that could carry an infantry platoon, and smaller, faster Swift Boats. Used to insert and extract infantry from combat situations, they also provided close-in fire support with 20mm cannons, .50 caliber machine guns, and grenade launchers, as well as small arms. Some of the larger vessels carried 105mm howitzers.

Planning for the MRF had begun in the summer of 1966, and the first elements arrived in January, 1967. By summer, 1967, enough river craft had been deployed to carry out sustained search and destroy missions. The full complement of vessels was not assembled until 1968.

That means that PFC Good participated in some of the earliest combat conducted by the MRF, including a major battle on June 19, 1967. Helicopters and Navy boats moved his unit into an area full of Vietcong troops. The ensuing battle left more than 250 Vietcong dead; 47 Americans were killed and many wounded. One platoon had 13 left out of the 35 who started the day.

After the battle, Paul Good was reported as missing. His body was recovered later.

He was awarded a Purple Heart and a Bronze Star for meritorious achievement.