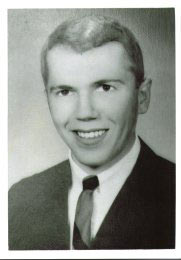 When First Lieutenant Paul W. Bush of Greenville arrived in Vietnam during April, 1967, he was assigned to Company C, 1st Battalion, 26th Marines at Khe Sanh, just south of the border with North Vietnam.

During the summer of 1967, Vietcong and North Vietnamese Army units began a massive buildup of forces in the area. For 77 days, the base was under constant attack by North Vietnamese ground forces, mortar, and artillery attacks. Enemy forces completely surrounded the camp.

Because the Command Chronologies of the 1st Battalion, 26th Marines have been published, we can read detailed accounts of what occurred during that entire time period. Take, for example, 22 March 1968. It lists 74 items for that one day, ranging from hundreds of rounds of incoming rockets, artillery, and mortar fire, to the filling of 50 sandbags.

Each entry is identified by time and serial number:

For the friends and family of First Lieutenant Paul W. Bush, including his new wife Patty, the only item that matters is item 68: the direct hit on C Company’s command post. The after-action report tells that the it killed three Marines. One of them was Lt. Bush. Another hit in the second platoon area killed two more Marines.