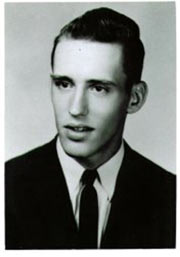 As the name implies, search and destroy missions were designed to locate and eliminate enemy forces. That didn’t work so well when half a platoon of American infantry located a well-rested North Vietnamese Army battalion fresh out of Cambodia.

That’s what happened on July 3, 1966, to Raymond Lee McGarvey near Pleiku in the Central Highlands of Vietnam. First thing in the morning, his platoon was split in two. Half of them went west toward Cambodia, the other half in another direction. The half that went west stumbled upon an empty enemy base camp. They checked it out, and determined that it was for a battalion-size unit. They decided to get out of there fast, but before they could get very far, they ran into an ambush.

Far outnumbered, they were the ones who were destroyed. Out of the 22 who had started out that morning, 15 lay dead and another four seriously wounded.

During that battle, Raymond McGarvey went out in a blaze of glory. His Bronze Star citation describes his heroic actions:

“On this date Private First Class McGarvey was serving as a rifleman in the 3rd Platoon, B, 1/35th Infantry which was on a search and destroy mission. His unit was ambushed by at least a reinforced North Vietnamese company; coming under intense fire and surrounded. Moving to a forward position, Private First Class McGarvey brought fire on the enemy inflicting many casualties. Seeing an enemy machine gun that was delivering particularly effective fire on his comrades, he moved to a better position in an effort to silence it. He continued his advance until within twenty meters of the bunker and then single-handedly charged the fortified machinegun position. In this act of great valor Private First Class McGarvey lost his life to enemy machine gun fire. His courage was an inspiration to all who saw it and strengthened the determination of his comrades to resist, despite the heavy odds they faced that day.”

Raymond was born in Clearfield County and moved to Transfer in 1964 with his parents, Mr. Mrs. Walter E. McGarvey. He worked at the Greenville Steel Car Company before entering the Army.