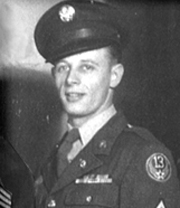 Early in 1943, Dick Bailey enlisted in the Army Air Force.

“A whole carload of us went up to Erie to join,” he said, “but I was the only one that went in. The rest of them all backed out.”

He never got home again until he was released from the service slightly more than four years later.

Dick was assigned to the 344th Service Squadron, 13th Air Force. They had a rough trip to the South Pacific.

“After going through Panama Canal, we dropped off supplies at Bora Bora. Going out the next morning we hit a reef, knocked a hole in the bottom of the ship, and bent the screw and the shaft. We vibrated the whole way to Noumea, New Caledonia.”

“Every time they drove the Japs off an island, we’d move up. We had a prop shop, metal shop, welding shop, and paint shop. One time they brought a B-24 in on its belly because the wheels wouldn’t go down. We put a new walkway in it and bomb bay doors and had it flying again in two weeks.”

Although they were hit with Japanese attacks from time to time, Dick’s worst injury was the result of a motorcycle accident.

“A big truck and trailer had just refueled a B-24. It pulled right out in front of me and I hit him broadside. I got a fractured pelvis and a concussion.”

Before the war was over, all four of his brothers also served in the military. Dick’s brother John had entered the army about a year before him; he served in North Africa and Europe. His brothers Fonnie and Frederick also served in Europe. Fonnie was wounded and became a prisoner of war. James joined the Navy in 1945. He later served as a paratrooper in the Korean War and as a helicopter pilot in Vietnam, where he died in action.