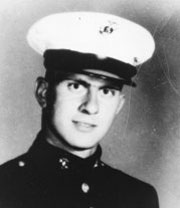 In January, 1967, a kid watched the funeral of Marine Cpl. Richard A. Funelli, Jr. in Farrell, PA.

“I was in seventh grade and watched his funeral from a school window across the street from Our Lady of Fatima Church,” wrote Chip Krokoski. “His Honor Guard, dressed in their Blues, seemed impervious to the miserable weather that day. The conduct of those Marines that day instilled in me the desire to seek a military career.”

Krokoski did indeed become a career officer, retiring as a Lieutenant Colonel. He never lost his desire to know more about Cpl. Funelli. He finally got some answers many years later after posting a question on the Internet.

“Cpl Funelli was a machine gunner,” wrote fellow combatant Harry Faber. “His position was hit by sappers and the sand bags fell on top of him and he died that way. . . . A lot of positions were hit with satchel charges that night. My hootch was blown up , even what I was sleeping on! It was like Custer’s last stand!”

“I remember Cpl. Funelli quite well,” wrote Jon Bolton, a survivor of that 15 January attack. “He had a great sense of humor. He made us laugh a lot.”

Bolton’s account of that night seems slightly at odds with Faber’s. “I remember Funelli initially surviving for some time after being wounded. He was lying on the ground outside of his bunker. In fact, I remember the Corpsman standing over him as he begged for Morphine to ease his pain.”

The information on the virtualwall.org that Cpl. Funelli died of artillery, mortar, or rocket fire would support Bolton’s version. The bottom line is this: it really doesn’t matter. Such variations can be attributed to the intense confusion that always surrounds close combat.

This was the second time Cpl. Funelli had been hit with shrapnel. He had been evacuated to Japan in March, 1966, to recuperate from wounds to his legs. He returned to Vietnam in late September.

Cpl. Funelli was the son of Mr. and Mrs. Richard A. Funelli, Sr., of Farrell. Richard Funelli Sr. served with the Marine Corps in World War II on Iwo Jima and Okinawa.

Cpl. Funelli enlisted in the Marine Corps two months after graduating from Farrell High School. He left behind his parents and a brother, Gerald, who was a ninth grader at Kennedy Christian High School at the time of Richard’s death.