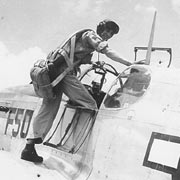 Even the best training can leave out a few vital pieces of information.

“During pilot training with the P-51 fighter in Florida,” wrote Lt. Robert Beck, “we were given very little information on how best to parachute from this airplane. I was to find out the hard way later in Burma.”

After his plane was hit, he released the canopy and pushed himself up while holding the parachute’s ripcord.

“The wind slammed me back against the armor plate of the seat and my right arm was forced back pulling the ripcord and opening the chute in the cockpit!! My immediate words were, ‘ah sh–!’”

He was violently yanked out of the cockpit. The chute caught on the tail; then his weight ripped it loose. He found himself with a gaping hole in his chute falling rapidly toward his flaming plane on the ground. Ammunition was exploding, sending tracers flying in every direction.

In spite of the hole in his chute, he pulled the shroud lines to avoid flaming wreckage. He hit the ground very hard.

Injured, worried about the Japanese, he crawled through several gullies looking for a way to escape. He was aware that he was slipping into shock.

“I found a clump of weeds, crawled in, and forced myself to lie still and think of nice things at home in Pittsburgh, Pa.,” he wrote.

Four hours later he heard P-51s flying over, but he couldn’t attract their attention. A short time after that, another pilot landed and took him back to the base.

That was not Lt. Beck’s last great adventure. He continued to fly missions, including the longest single-engine fighter mission in World War II. Forty P51s took off from what is now Bangladesh to attack an airfield near Bangkok, Thailand, more than 700 miles away. Taken totally by surprise, the Japanese put up no resistance. Thirty-nine of the planes returned home more than six and a half hours after they had taken off, having inflicted severe damage on the targeted airbase.

Lt. Beck returned home in June, 1945, and was discharged from the service in October. For his service, he was awarded an Air Medal, a Purple Heart, and the Distinguished Flying Cross.

He married June Shafer in 1948; they had three children. After working 38 years with Bell of PA, he started Sharon Commercial Printing. He passed away in January, 2006.