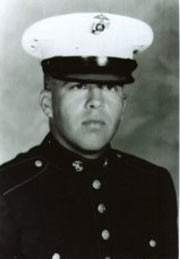 American forces in Vietnam fought two wars at the same time: the war to defeat the enemy with weapons and combat operations; and the battle to “win the hearts and minds of the people.”

The Marine Corps united these two missions by implementing the Combined Action Program, in which a squad of Marines would live in a Vietnamese village and combine combat operations, especially village defense, with Vietnamese Popular Force platoons. The close, constant contact between U.S. Marines and Vietnamese people was aimed at spreading the geographical area that could be effectively controlled by the U.S. military while improving understanding and trust between the Americans and the Vietnamese.

Given the nature of the war and the frequent inability to distinguish friend from foe among the Vietnamese, serving in these units demanded extraordinary fortitude and bravery. Corporal Roger A. Brown was one of those Marines who served in a Combined Action Group in Quang Nam province. He was killed by small arms fire while on patrol on December 18, 1968.

Roger was born to Jack and Pauline Cooper Brown in 1945 in Winchester, Virginia. According to his friends, he was a great guy. After working at General American Transportation Corporation and the Coca Cola Bottling Company in Sharon, he joined the Marine Corps on September 29, 1967. He trained at Camp Lejeune, North Carolina, and Camp Pendleton, California, before going overseas on March 1, 1968.

Roger left behind his parents; his wife, the former Marcia Gladysz; a son Gregory and a daughter Jacqueline; a sister, Mrs. Gail Shields; and a brother Jerry.